When I first saw the above trailer for “The Tree of Life,” I was intrigued by it even though it was unclear what the film would be about. Unfortunately, after seeing the movie I still have no idea what it was really about or what director Terrence Malick was trying to accomplish with it. The Tree of Life is a direction-less, often yawn-inducing work that belongs more in the abstract section of an art museum than a movie theater. One gets the sense that Malick is trying to make some broad metaphorical statement that reaches far beyond the basic central story of a troubled 1950s-era family. But the big picture is sure to be lost on everyone but Malick himself. Don’t be duped into seeing this movie because stars Brad Pitt and Sean Penn (who hasn’t been in a bad film in the last 10 years) are in it. If you’re even considering seeing “The Tree of Life,” make sure you wait until you have access to a fast forward button.

“The Tree of Life” boasts a lengthy run-time of two hours and 18 minutes when it could have easily been cut down to about an hour and a half. The remaining 45 minutes of the 138 minute runtime are spent on long segments of random footage of mother nature and the solar system that are likely to put you right to sleep (see the first ten seconds of the trailer for a preview). When this abstract onslaught began about 20 minutes into the film, I felt like I’d been suddenly transported to the Boston Museum of Science. Surely I was now watching one of the Mugar Omni Theater’s typical nature documentaries – the only thing absent was the usual narration by Morgan Freeman or Oprah Winfrey. Just as I settled into the inescapable fact that the next two hours of my life would be spent watching a planet Earth kaleidescope, Malick suddenly cuts back to some resemblance of a story! Thank God! The ensuing hour and a half block is spent watching the O’Brien family grow and struggle in the 1950s. But don’t worry, because just as you’re beginning to forgive and forget Malick for the rocky start, he decides to end the film with a solid 25 minute combination of random nature footage and shots of Sean Penn still wandering around aimlessly. 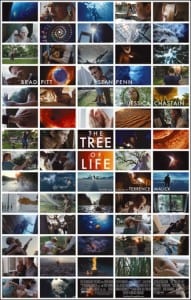 It’s a shame that all of the snore-inspiring abstract footage ends up killing the film, because otherwise the story at the center of it is actually rather interesting. Brad Pitt gives a surprisingly deep and believable performance as a strict father struggling to raise his boys during the 1950s. Pitt’s turn as Mr. O’Brien along with an exceptional supporting cast as the rest of his family makes for a fascinating look into growing up in the 50’s and the challenge of raising kids. In addition to this captivating topic, the entire film is beautifully shot. The composition, color, and lighting of each scene is phenomenal, to the point where you could pause the movie at any point and that freeze-frame could serve as an incredible still photo on its own. Sadly, the extra fluff in “The Tree of Life” is too much and ultimately ends up destroying the film’s potential.

Though the middle portion of “The Tree of Life” succeeds in many ways, the film as whole most definitely does not. Save yourself the agony of sitting through the unbearable parts by waiting until you can pop in the DVD and skip right to the good stuff.