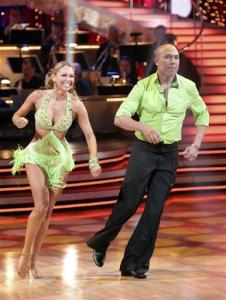 It was a perfect ending — literally.

Hines Ward, Chelsea Kane and Kirstie Alley each received perfect scores for their final performances Tuesday on the “Dancing With the Stars” season finale.

But in the end, it was once again a football player to take home the title.

The judges’ scores combined with viewer votes, and Ward broke a tie with Kane and held off Alley in the final.