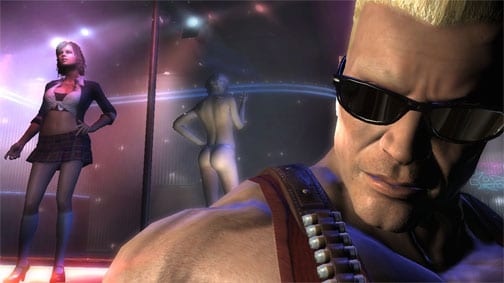 My Grandpa once told me how he felt the day of the moon landing. Today, I finally know how he felt. Ladies and gentlemen, Duke Nukem Forever has gone gold.

For those not in the know, when a game goes gold, it means that it’s ready to be pressed, copied and be shipped to your sweaty hands. While games go gold pretty much everyday, this is Duke Nukem Forever, and this is a big deal.

“Duke Nukem Forever and its journey to store shelves is legendary,” said George Broussard, creative director at 3D Realms. “It’s an epic tale of four game development studios that banded together and did the unthinkable and shipped the unshipppable. When you play this game you will be reminded of that epic journey at every turn and in every small detail of the game. The character, attitude, interactivity, gameplay and political incorrectness combine to make a Duke Nukem game a unique gaming experience. In the timeless words of Duke Nukem it’s finally time to ‘Come Get Some’. Come be a part of gaming history.”

Duke Nukem Forever’s long development cycle has become infamous in the gaming community. First announced in 1997 at 3D Realms, the game suffered countless delays until the studio shut it’s doors and ended it’s operations; and as most suspected — the life of Duke Nukem Forever. That is until Gearbox announced at Pax 2010 that it would be developing and releasing the game.

“Always bet on Duke, I did,” said Randy Pitchford, president of Gearbox Software. “I bet on all of the developers who have ever been a part of this legendary project and I bet that none of us want to live in a world without the Duke. I’ve played the final game and it is an incredible experience – a once-in-a-lifetime opus of interactive entertainment that reminds me once again why Duke Nukem is our King.  The developers of Duke Nukem Forever at 3D Realms, Triptych, Piranha and finally at Gearbox deserve our thanks and respect for never giving up and have truly shown us that they have balls of steel!”