The Marx Brothers are just about invincible.  It never mattered too much how flimsy the architecture erected around their shows proved to be. Lame set-up men, dopey musical elements (both of which you’ll find in the Lyric version) don’t matter in the revivals much either as long as you bring the goods when it comes to the brothers: the cadence, the silly walks, the absolute delight in mischief and complete absence of shame in the delivery of endless puns, putdowns and sight gags. 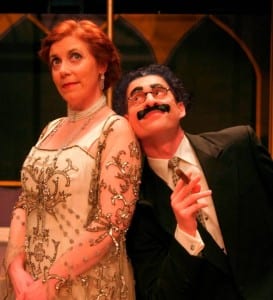 In Ed Hoopman, the Lyric’s production benefits from the talents of a phenomenal mimic. He has Groucho’s resonate, nasal baritone down to a tee, he can caper and mince with the best of them, and the word play he slings ripples thrills throughout the crowd whether they’re new or old to the hearer. Kudos to the Lyric for nailing the all-important glasses, schnoz and grease paint, from ‘stache to coif.

Likewise, the extremely talented Nael Nacer gets Chico—a flea-ridden grifter with a singsong Italian brogue who is as affable and tenderhearted as he is roughish.  Chico is the glue that holds the act together. He has to charm the stigma off of his profession, he has to rein-in the chaotic, deviant mania of his partner Harpo, and he has to match wits with Groucho, using his mock-dim act to alternately set him up or shoot him down. Nacer does it all. Kudos again to costume designer Charles Schoonmaker for nailing that peculiar pointed hat and the rest of the look to the smallest detail.

The casting of Alycia Sacco as Harpo is a bit more problematic. More difficult than her gender is actually her petite stature. Not only is she an unconvincing threat when she chases the other females around the stage, she just doesn’t look like a Marx Brother. Sacco has clearly studied Harpo’s iconic facial expressions, “googie” and all, but they just don’t play the same with her small facial features and disproportionately large fright wig. 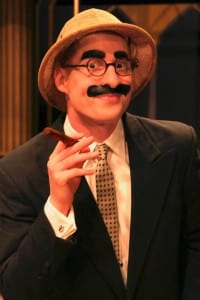 Nevertheless, the shtick is often enough to do the trick. There’s the sudden, pointless, thrusting of Harpo’s leg into the arms of the nearest bystander, the honking of a staff-mounted bicycle horn in the place of speech, the trench coat from which any prop can emerge and into which any stolen item can disappear, and all the other tricks that make Harpo the greatest ever incarnation of the harlequino.

“Animal Crackers” began life in 1928 as the Marx Brother’s third and final Broadway Musical. It was adapted into a film in 1930, and has been revived and adapted for the stage numerous times by numerous companies. It always revolves around the arrival of Groucho’s character, Captain Jeffrey T. Spaulding, the esteemed African explorer, to a fancy party in a Long Island mansion of one Mrs. Rittenhouse. Mrs. R. is the Margaret Dumont role, which calls for the challenging alternation of hoity-toity shock and clueless bashful fluttering in response to a barrage of left-handed compliments and blatant affronts from the good Captain. Leigh Barrett handles the role deftly.

Among Captain Spaulding’s train are Harpo’s character, the professor, and Chico’s character Emmanuel Ravelli, whose presence is pretty much unexplained. As always, they get mixed up with the romantic plot, which revolves in this case, around the unveiling of a valuable painting which some of the party’s guests want to steal it, and another of the party’s guest, our romantic young tenor, played by Grant MacDermott, who wants to replace it with his own version to establish his artistic chops among potential buyers.

The only other thing that need be said about this plot is that it features the immensely charming actress Aimee Doherty in duel roles as Mrs. Rittenhouses’s daughter Arabella and her society rival, Mrs. Whitehead. She steals more than a few scenes.

“Animal Crackers” is vaudeville and watching it makes one long for the days when entertainers were more frequently artists who could not merely execute a script but also play their own instruments and improvise their own witty banter. The Lyric doesn’t have that, but it’s got the essence of the act, and if you have that, you’re basically invincible.