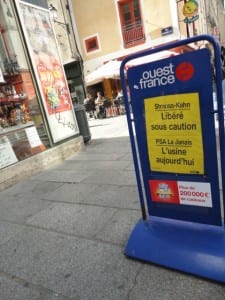 RENNES, France — Many French people say the political career of Dominique Strauss-Kahn is history, yet talk about the New York-based sex scandal of the former International Monetary Fund director and top candidate in the 2012 French presidential elections continues to bubble in his home country.

Strauss-Kahn’s situation has raised questions in France about the pertinence of public figures’ personal choices, and while the country relishes its historical disconnect between public and private life, many young French voters say this episode has changed their thoughts about the private lives of public figures.

“In general I vote for the political ideas of the man, not for his private life,” said Gaëlle Simonin, 23, a student in Rennes.

“[But] there are things that you can’t ignore.”

Most young voters said they were shocked by last Monday’s news, but not necessarily surprised.

“I never imagined that we could see DSK in handcuffs,” said Fatoumata Trahoré, 26, a student in Paris.

“But on another side, it is known that women are one of his weaknesses. He admitted it on newspaper,” she said.

Strauss-Kahn has a long history as a womanizer and is most recently known to have had an affair with a staff member in 2008.

Trahoré said she considered Strauss-Kahn the best candidate in the 2012 elections because of his social and economic experience.

“It’s sure that I’m going to vote for another candidate.”

So does a politician’s personal life matter when voting?

“Until now I didn’t think so. But today I suppose it’s vital. It’s important to know the personality of the person who is going to make decisions about our state,” Trahoré said.

“I was considering voting for DSK, because I think he has a great international experience, and you can’t be a French president without [that],” said the 27-year-old technical engineer who said he does not belong to a political party.

Delagarde said the personal lives and habits of politicians shouldn’t be important when choosing a candidate.

“I don’t know why people are so upset when they see a picture of a politician in a luxury car. You can’t judge someone on how he looks or what car he drives. The only thing that matters to me is what they do and how they do it,” he said.

Delagarde said he’d have to know whether Strauss-Kahn is guilty before he decided whether to vote for him.

“How could you vote for someone who’s a rapist?” he said.

Other young voters said they were not shocked at all.

Morgane Mercier, 24, a student in Rennes, said she believes Strauss-Kahn was set up.