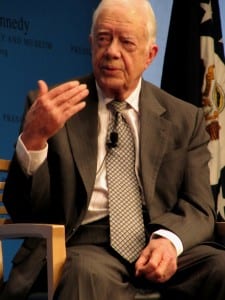 President Jimmy Carter was at the John F. Kennedy Presidential Library and Museum Tuesday afternoon to promote his new book, “White House Diary,” a daily account of his 1977-1980 time in the Oval Office. He described the journals that went into the book as “personal diaries” that he never meant to publish, although he did acknowledge he was always aware they would be of interest to posterity.

Carter, 86, also spoke about Middle East peacemaking efforts during his presidency. He said while not wanting “to get too personal” when discussing the Reagan administration, “hardly a word was said about Middle East peace for the next eight years. Those things hurt.” Talking about the 21st century, Carter said there are “chances now to see peace in the Middle East that were dormant last year.”

He was critical of certain US policies in past eras, noting that the Islamic fundamentalist group Hamas was not deemed a terrorist organization until after its candidates prevailed in lawful elections. He added, “It’s not a very popular thing in our country to say anything that criticizes the incumbent government of Israel.”

Describing US foreign policy during the Cold War, Carter asserted that “presidents were in bed with dictators, particularly in the Latin American world…corporations would gain great benefits from us getting cozy with dictators.” He went so far as to describe how the US would help dictators crush free speech and legitimate efforts at reform under the pretext of fighting Communism.

Asked about the unique role of Roslynn Carter during his presidency, the former president said “Roslynn could speak more accurately for me than the Secretary of State or the National Security Advisor.” He described the surprise of foreign leaders when Roslynn would confront them face-to-face about corruption in their governments or civil injustice in their nations. Flashing his wide, often-caricatured smile Carter added, “She was very willing to do it, to put in mildly.”

Carter described eventually inviting his wife to sit in on cabinet meetings so he “didn’t have to spent half the week” bringing her up to date on what was going on. Not withstanding the First Lady’s involvement with so many important issues, Carter said that one of the proudest moments of his presidency was when someone identified Roslynn as being one of ten women who had the most beautiful legs on Earth.

Reflecting on the time between leaving office and the present day, Carter said, “I think I’m basically still the same person with the same commitment…as I was at my inauguration speech.” But he added that his awareness has increased, particularly regarding the “poverty stricken, neglected and forgotten people of the world.” Talking about many in such circumstances, Carter said “they’re just as intelligent as I am, and just as ambitious. Their family values are just as good as mine.” The difference, he said, was the level of opportunity available to them.

Carter compared the success of the recent mission to get Osama bin Laden with Operation Eagle Claw, his administration’s failed 1980 attempt to rescue the hostages held captive in Iran. “When people ask me what I would change from when I was in the White House” said Carter ruefully, “I always say I would send one more helicopter…if I knew then what I know now, I would have sent one more helicopter.”

Carter’s appearance, part of the Kennedy Library Forums series, was moderated by Ray Suarez, senior correspondent for PBS NewsHour. Jimmy and Roslynn Carter have a long and seemingly close relationship with the John F. Kennedy Presidential Library and Museum. While president, Jimmy Carter spoke at the library’s October 20, 1979 dedication ceremony. The two have been back there, alone and together, on many occasion since – most recently in November of last year when the 83-year old Roslynn Carter spoke about “Within Our Reach: Ending the Mental Health Crisis,” a new book she published with Susan K. Golant and Kathryn E. Cade.