It is not every day that one gets to sample wines within the walls of Fenway Park’s State Street Pavilion; rarer still is the opportunity to do so for a good cause. Yet on May 10, 2011, the Foundation for Fighting Blindness provided Bostonians with the opportunity to do just that. For the second consecutive year, Boston’s business community, civic leaders and philanthropists came together to raise their glasses and raise funds to support research to save and restore sight 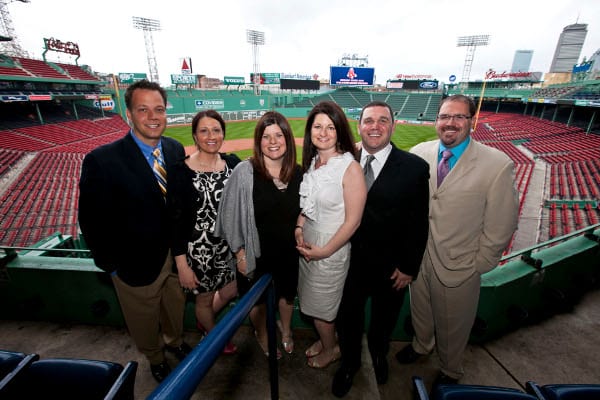 More obvious than anything else, the elegant event’s atmosphere was abuzz with interest. Curious guests looked over the myriad of items set out for silent auction. With packages ranging from designer watches to wine cork wreathes to sports jerseys, there was indeed something for everyone. Those not eyeing the auction were engaged with vendors and distributors who served up tastes of fine wines from locales that ranged from Portugal to Portsmouth, R.I.

At two years old, the annual wine tasting is a baby, but the Foundation for Fighting Blindness (FFB) is no neophyte when it comes to throwing events. In prior years the FFB hosted two separate large scale events, a gala in the spring and a golf tournament in the fall. The intention of the wine tasting was to unite the two. Considering the awe inspiring locale of the legendary Fenway Park and the chicness of the wine and hors d’oeuvres, it is safe to that the FFB was successful in doing exactly that.

When asked about the event’s biggest perk, co-chair Scot Trainor replied without hesitation, “Absolutely Fenway Park! You just can’t beat the venue.” Both Trainor and his brother were diagnosed with Usher Syndrome, the most common condition that affects both hearing and vision, as young children and have been involved with the  FFB for over a decade. Scot and Erin Trainor, Kevin and Laura Trainor, and Monique and James Antonelli all served as co-chairs for the night’s event.

Founded in 1971,  the FFB defines its goal as “driving research that would lead to preventions, treatments, and cures for the entire spectrum of blinding retinal diseases–including macular degeneration, retinitis pigmentosa, and Usher Syndrome–that together affect more than 10 million Americans and millions more throughout the world.” The Trainor family was happy to note that nearly all of the funds raised at events such as this goes directly to research. Over the past 10 years, the FFB has raised $1 million to benefit institutions such as Massachusetts Eye and Ear. 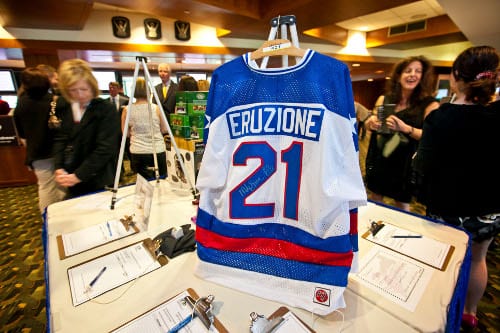 This autographed jersey was one of the many items up for auction.

A speech given later in the evening by Trainor’s sister Monique Antonelli described the personal impact of retinal diseases. “Those suffering struggle in dimly lit places, and restaurants, bars and movie theaters are perennial obstacles,” she said. “There is a poignant  pain that accompanies the contemplation of a child who will never take in a starry July sky or know the thrill of playing Little League baseball.”

These sentiments were echoed in a conversation with Erin Trainor, Scot Trainor’s wife. To those suffering or coping with the diagnosis of a loved one, she advises, “Try and lead as normal a life as you can. Because you can.” Such a goal, so important and empowering, is moving ever closer to becoming the easy reality it should be through the efforts of the Trainor family and the FFB. When the FFB’s chairman of the board, Gordon Gund, was diagnosed with retinitis pigmentosa in 1971, there was absolutely nothing that could be done for his condition. Today, the FFB is the largest foundation of its kind in the world, funding research that is now allowing doctors to restore vision.

Upon hearing this, the emotion and support from the crowd was palpable. Looking around, it was clear why a wine tasting was more fitting than a gala or a golf tournament: with achievements as great as this being announced, it is only appropriate that those in attendance should be able to raise a toast.