There’s no way around it: this “Antony and Cleopatra” just isn’t sexy enough. James Andreassi and Paula Plum are both first rate actors, but there’s not much sizzle between them. While each offers a superb display of the moodiness, cunning and brazen politicking that characterizes these infamous lovers, neither exudes their lust or weaves the irresistible spell of temptation central to their legend. 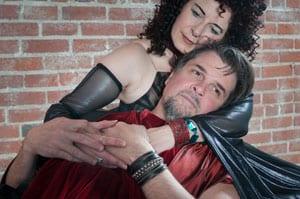 Still “Antony and Cleopatra,” has much to offer as a play about politics, diplomacy and the utility of myth making in public relations, told in some of Shakespeare’s finest poetry. Doug Lockwood is wonderful as Octavius Caesar, a wonkish and preening stoic whose rare flashes of fury at perceived slights to his honor are all the more horrifying for his pervading reptilian coolness.

Strangely, the normally brilliant Richard Snee never seems to get his teeth around the role of Enobarbus, the chief advisor and acerbic court jester to Antony, who switches teams is a moment of abject frustration when his captain allows his romantic passions to defeat his proven military acumen, a calculation he comes to feel has cost him his soul. Snee somehow loses much of his humor and the heartbreaking vulnerability that lies beneath it, flattening the character’s arc to a dull rumble of elocution.

Among the many strong players of the always excellent ASP ensemble, a standout is newcomer Johnnie McQuarely, who plays both a menacing soldier and a hilarious messenger, who has to learn on the fly just how to break upsetting news to Cleopatra about her lover. While he does not dare lie to the queen, she makes no secret of the fact that she rewards the slant she likes to hear and punishes the bearer of bad news with terrifying venom.  His negotiation is  the most comic of the play’s many demonstrations of delicate and urgent diplomacy.

Fun as politics are though, the designers of this production bluntly indicate what’s supposed to be boiling at its core. Its backdrop is a wall of coiled bedsprings, its soundtrack: hard rock.

Directed by Adrianne Krstansky, “Antony and Cleopatra” plays at the Modern Theatre through May 21.