The last we saw of Joseph Gordon-Levitt was his suave portrayal of Arthur in last summer’s blockbuster hit Inception. But in his latest project, Hesher, gone is the slicked back hairdo and the confident calm that he commanded while navigating the dream world. This time around, Gordon-Levitt portrays a long-haired, ill-mannered, rambunctious degenerate named Hesher. Hesher’s quick-temper but overall apathy for life makes him unpredictable and at times unstable, and the film follows suit. Though it’s entertaining to watch the conflict between Hesher and the mourning family he has forced himself upon, there are certainly times you’ll wonder where the movie is going.

Hesher is a gritty tale about a rebellious punk who affects and changes a grieving family when he suddenly starts living with them. It all begins when a troubled young boy, T.J., accidentally exposes Hesher’s house-squatting to the local authorities. Needing a new place to live, Hesher walks into T.J.’s house unannounced and makes himself right at home. For some odd reason the family lets him stay – perhaps because of their shattered emotional state after losing their wife and mother. What ensues is a tumultuous relationship between Hesher, T.J., and the rest of the family. A force as brutal as Hesher may be the only thing that can break the family out of its deep depression. 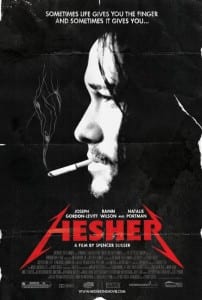 Hesher is very clearly a character study of a film that relies more on a string of emotionally charged scenes than a progressive storyline. It’s as if the only way that Hesher will be able to save T.J.’s family is to keep poking and prodding them until he finally gets a reaction from them and something changes. There are a number of scenes that showcase Hesher’s wild side and seem random and unimportant save for the purpose of demonstrating just how psychotic he can be. Simply put, there just isn’t much of a story arc here, but rather a series of Hesher episodes that eventually push T.J. to the breaking point. Unfortunately you’re bound to grow restless waiting for that to happen.

But what Hesher lacks in story it makes up for with interesting and dynamic characters that propel the film from start to finish. Newcomer Devin Brochu is impressive as the tormented soul of young T.J, who clearly internalizes the pain of losing his mother. Another surprising performance comes from veteran comedian Rainn Wilson, best known for his role as Dwight on the popular television show The Office. In Hesher, Wilson is called upon to be an emotional-wreck of a man and in doing so convincingly, he really demonstrates his ability to do more than just comedy. But undoubtedly the most enjoyable transformation is Joseph Gordon-Levitt into Hesher himself. Not only is Hesher a character unlike any Gordon-Levitt has played before, he’s just a very unique character in general. Here, Joseph has left his usual cinematic charm behind and replaced it with a fascinating vulgarity, grunge, and repulsiveness that is totally new to the actor yet comes just as easily. And as a side-note, Natalie Portman makes an appearance as the awkward supermarket cashier that befriends T.J, but a lack of scenes ultimately limits her ability to do much with the character.

In the end, Hesher delivers some surprising performances and a number of laughs but ultimately feels like it’s missing something to pull it altogether. You should definitely check this movie out, but unless you’re a big Joseph Gordon-Levitt fan I’d recommend you wait until it’s on DVD to do so.