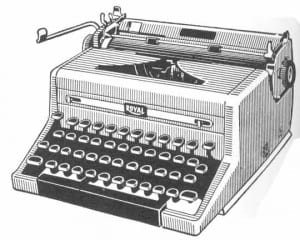 Say goodbye to the clackity clack of the buttons, and that satisfying winding and ding noise of the line feed bringing your cursor down to the next line, because the typewriter will be no more. Godrej and Boyce, an industrial conglomerate in Mumbai, India, the last known company to still manufacture Typewriters, announced they will cease production of the non-electric typewriter due to increasingly low sales.

The company has fewer that 200 typewriters left, most of which were keyed in Arabic.

Many of us, even in our tech-heavy Generation Y, typed our first school papers on typewriters. It’s easy to criticize our old friend the typewriter for its many flaws — let’s be honest here, who hasn’t sworn at one after a ill-timed tap of the wrong button on a carbon paper form? But the concept of the typewriter paved the way for us to find increasingly more efficient ways to record the written word.

Early versions of typewriters go back as far as the early 1700s when Henry Mill, a British inventor, created a machine that transcribed letters onto parchment. Over the centuries, inventors from all over the world created their own versions of these machines that were used to produce type to typewriters incorporating advancing technology. In the mid 1800s, Charles Thurber, an inventor from Worcester even created a patent of the typewriter that was designed as a dictation aid for the blind community. By the early 1900s, the typewriter had evolved into a design that has had no significant design changes from the (few) typewriters that we see today. With the onset of urbanization and increasing communication needs, typewriters became a very popular tool for the business world.

Eventually, the machines that immortalize printed type into books, manuscripts, and other forms of communication evolved into the arguably more efficient form of a computer.

So let’s all take a moment to mourn the loss of a classic piece of history. Typewriter, you were a savior to all of us with atrocious penmanship, and for that, we will always be grateful. You served us well all those years, but I’m sure you can understand, we simply can’t turn down a computer that also allows us to type and delete as many times as our little hearts desire. Its time for us to move on into the 21st century.