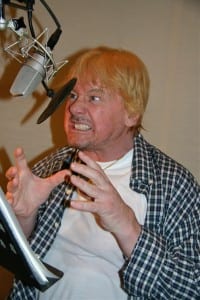 We are going to show a bunch of early wrestling clips…of course.

“Rowdy” Roddy Piper ruled the wrestling ring for the better part of four decades, crafting a Hall of Fame career that brought cheers — and huzzahs — from fans across the globe. Along the way, Piper established numerous milestones that set his career apart from all others.

At 15, Piper was the youngest professional wrestler to ever enter the squared circle – and he would proceed to hold more than 38 titles while eclipsing 7,000 victories in professional matches. It was the main event at the very first Wrestlemania – pitting Piper and “Mr. Wonderful” Paul Orndorff against Hulk Hogan and Mr. T – that truly established the WWF/WWE.

Today, Piper is out of the wrestling spotlight, but he remains in entertainment with a one-man show and an autobiography, “In the Pit with Piper” on shelves. He has also been doing movies since 1978.

On June 7, Piper shows some voiceover acting chops when he plays the barbaric Bolphunga in Green Lantern: Emerald Knights.

Piper’s character – Bolphunga the Unrelenting – is the central antagonist in the episodic segment entitled “Mogo Doesn’t Socialize.” Based on the 1985 story created by Alan Moore and Dave Gibbons, the story centers on Bolphunga’s search for Mogo, the largest Green Lantern, in hopes of engaging the famed warrior in a battle worthy of the villain. The role serves as a perfect vehicle to showcase Piper’s strength and wonderful sense of humor.

Piper spent a few moments after his recording session to discuss his current activities, his love of acting, and the responsibilities of being a role model. Listen closely … because Roddy just ran out of chewing gum.

QUESTION: Green Lantern: Emerald Knights was your first-ever voiceover for animation. How was the experience?

RODDY PIPER: That was about as much fun as I could ever hope to have. You can really lose yourself in an animated role. There’s so much freedom, so much room for creativity. It’s a blast.

QUESTION: Professional wrestling gave you plenty of experience being both the villain and the hero. How does the public perceive you today?

RP: I guess a lot of folks have grown up with me and, in an awkward way, for people who really have seen the good sides of me, I’m like a father figure. It’s remarkable – every place I go, there’s somebody that has an inspiring tale to tell. At one of my shows, there was a policeman named Paul who had been awarded a Congressional citation for saving someone’s life. He came up and gave me his citation. He said that when he was a little boy, he had troubles – but he would watch me and that’s where he found inspiration and direction. So when he goes into a tough situation, he relates to (my actions), and he says it saved his life.

The profession that I took upon is a lawless, tough piece of work, and so many of my friends are dead now. So in my one-man show, I tell the folks about people that they grew up with, people that they may have related to in different ways. My profession is very renegade. But as crazy as it seems, it’s as real as it gets.

QUESTION: What’s your approach to performing these one-man shows?

RP: I was with Burt Reynolds at his house in Jupiter (FL) and he said to me, “The one thing I try to convey as actors is that we don’t get enough ‘Atta Boys.’ So I try to make them leave with an ‘Atta Boy.’ And that really sticks with me. Encouragement is an essential.

QUESTION: You seem like a natural for animation. What’s your attraction to playing an animated character?

RP: I like the fact that I can go away and lose myself so I don’t have to live in the world of courage that everyone else does. I like creating, it’s what I do, and acting allows me to stretch all those different muscles in all kinds of ways. That’s pretty cool.

QUESTION: There are those that would claim wrestling is acting. What are the key differences in those two performances?

RP: Wrestling and acting couldn’t be anymore different in terms of what it takes to entertain. Wrestling is explosion, acting is implosion. One really screws up the other. That’s why Hogan sucks. If I came out on camera like I do in Madison Square Garden, it would look crazy. Clint Eastwood just shakes his head and raises his eye and it works. But when you’ve got 96,000 people at Wrestlemania, I need to get through to the back row. Fighting is not internal, but it can be very spiritual. Everything acting is internal. One of my problems in making the transition is pulling back, but I’m working on it.