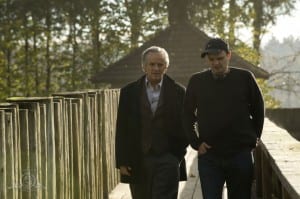 THIS is how you do time travel

I can’t believe this.

After all my negative reviews and all the trashing followed by a slow, steady improvement that showed that either the producers were actually listening to fans or they were leading up to something in the first place — it’s all going to be over soon.

To say that “Stargate Universe” started out slowly is an understatement. It started out horribly.

The actors took a long time to get their cadence built up, and the “we’re gonna die every episode” mentality got old really quickly.

So SyFy did what SyFy does — they cancelled the show without asking too many questions.

And here’s the kicker: Season 2 has been excellent, particularly at the end.

The episodes Common Descent and Epilogue stack up with anything else on SyFy and did the “time travel” angle better than “SG-1” and “Atlantis” ever did. The two-parter was moving, gripping and human, and the actors did a good job putting it all out there.

The episodes revolved around the Destiny accidentally going back in time 2,000 years before being destroyed, but not before most of the crew went to a nearby planet. Over the next 2,000 years, they spawned their own civilization.

In some weird loop of time, a copy of the Destiny arrived later and found “their people.” The resulting interaction was the best piece of television the “Stargate” franchise has ever put out.

And after the action-packed Blockade episode, that left one crew member blind in another emotional performance, there’s only one left before “Universe” goes away for good.

That, is a shame. Because I was wrong about “Stargate: Universe.” Dare I say, it’s good. It has a lot of the components that the other two shows lacked, and its serious tone is starting to sell the human drama element that is so critical in a science fiction show.

Maybe if the first two seasons were packed together into one. Maybe if the producers forced a little more team building before taping the show. Maybe it’s not too late. I don’t know what the exact solution is, but certainly even the suits at SyFy must have felt that “Universe” had a chance when it was discussed at Comic-Con in San Diego in 2009.

Unfortunately, it all happened too slowly, even for cable’s standards.