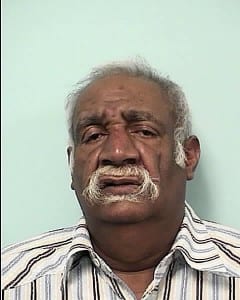 A 60-year-old Springfield man was arrested Monday afternoon and charged with his fourth drunk driving offense after police said he hit a pedestrian.

Jose A. Rivera, of Horace Street, was arrested after police responded to Belmont Avenue on a report of a pedestrian struck. As soon as police go there, Rivera was “displaying many signs of intoxication,” said Sergeant John Delaney, a Springfield Police Department spokesman.

Rivera had alcohol on the breath, glassy and bloodshot eyes, difficulty standing up and slurring his speech, Delaney said.

“When asked if he had been drinking, the driver admitted to having had consumed several Vodka drinks,” Delaney said. “He stated that he was driving along Belmont Ave when the pedestrian ‘just walked out in front of his car.'”

The pedestrian’s name and details on the person’s injuries were not released.

He was arrested and brought to the police station for a breathalyzer test, but Delaney said he was too drunk to actually perform the test. He was charged with operating under the influence, as his fourth offense.