The dense, joke-packed first act of Stephen Karam’s new play, “Sons of the Prophet,“ flew by so quickly I immediately wanted to see it over again. It’s second act was every bit as engrossing. It also ended just as abruptly.

Wait, why was it significant that the brothers Joseph and Charles, were descended from Khalill Gibran? I found myself asking. What did it mean that as gay men, they were last of their bloodline? Did nothing come of the fact that Charles was clearly hitting on Vin, the young athlete whose botched prank caused the car accident that killed Charles and Joseph’s father?

Some of these (and other questions I had) are of exactly the kind you want buzzing in your head as you exit a theater. Others felt like balls were dropped. Ultimately this play goes down as one of the most enjoyable I’ve seen this year, in part, because it’s a superbly acted study of rich, quirky characters, and in equal part because it didn’t remind me of anything else I’d seen. Family-based dramas can feel overly familiar, but this kept me engaged and guessing throughout. 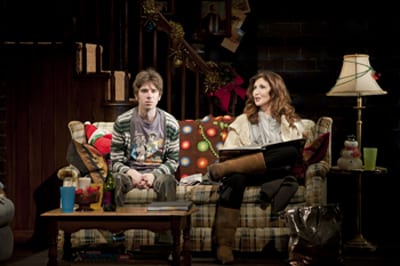 This family drama, for example is conspicuously missing a father and mother. Although it does have strong and (typically) dysfunctional parental figures. Karam’s protagonist Joseph (Kelsey Kurz) is, like him, a man of Lebanese descent living in a working class Pennsylvania Suburb. In his mid-twenties, Joseph’s parents have both passed away. His mother figure is his scattered-brained and neurotic boss Gloria (Broadway great Joanna Gleason), a fading book editor who believes she can redeem both of their lives on the back of a book about his literary heritage.

In the wake of his father’s tragic death, Joseph’s father figure is his uncle Bill, played by Yusof Bulos, who moves in with he and his high school-aged brother (Dan McCabe) under the guise of taking care of them, when it is Bill who clearly needs caretaking. As if this weren’t enough with which to contend, Joseph is facing the onslaught of debilitating medical condition. He’s also faced with a suitor (Charles Socarides), who happens to be a reporter, and who, like Gloria, may just be using him for his tragic story.

Finally, his strange, strained family is facing the decision of whether or not to forgive Vin, the aforementioned athlete who put the mascot of his opposing football team in the road on the fateful day of Joseph’s father’s crash. Vin seeks a university football scholarship and he knows that to get that, he must first win this family’s forgiveness.

“Sons of the Prophet” is a play about confronting losses and life transitions of all times. It’s exactly the kind of subject that calls for a deft mix of comedy and tragedy. Karem delivers and so does this remarkable cast and crew.

Directed by Peter DuBois, “Sons of the Prophet,” plays through May 1, at the Huntington Theatre Company’s Calderwood Pavilion at the Boston Center for the Arts.