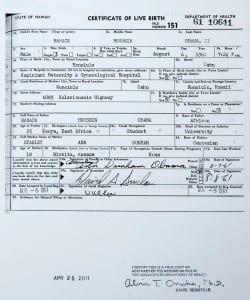 In a probable attempt to silence the “birther” movement, the White House has actually released a copy of President Barack Obama’s long-form birth certificate from Honolulu. What remains to be seen, however, is whether this unexpected and unanticipated move will silence the Tea Party and other conservative critics or just give credence to their arguments.

According to the Associated Press, large numbers of Republicans continue to say that they doubt whether Obama is a natural born citizen and therefore eligible to be president. Donald Trump, engaged in his own campaign for the office, has used the controversial issue as he tests the waters.

Speaking Wednesday, Obama said that the country can focus on solving its problems only if it moves on and is not distracted from issues like this.

So he put it on the front page of every newspaper and blog in America.

The document lists Barack Hussein Obama II born at 7:24 p.m. on Aug. 4, 1961, at Kapiolani Maternity and Gynecological Hospital, in Honolulu.