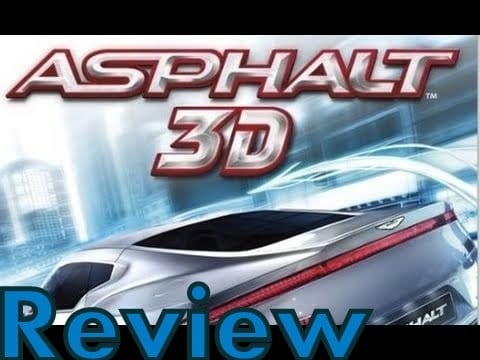 Like most of Gameloft’s releases, the Asphalt series never banked its success on being original. Startinglife off as a straight-up clone of

console-style arcade racers for cell phones, the series moved to the DSfor that system’s launch back in 2004. As it turns out, not much has changed in the intervening years.

Asphalt 3D takes clear inspiration from EA’s Need for Speed and Burnout series. It comes packed with 17tracks and 42 licensed cars. Such numbers can’t compete with the PSP’s Gran Turismo, but still provideplenty of variety. Asphalt’s physics and controls are incredibly forgiving, although the opponent AI isgenerally fairly strong.

For a straight-up racing game, Asphalt 3D is certainly serviceable. The game has a generic look and feel,but can definitely be fun. The problems come when the gameplay tries to emulate more advancedaspects of AAA racers. The use of slow-motion, cinematic crash sequences from Burnout, for instance,is done incredibly badly. The physics are inconsistent, so taps on the rear bumper might cause a car tocareen into the air, while hard slams do nothing.

The crash sequences are just unnecessary and distracting, ruining the pacing of the game and oftencausing the framerate to take a dive. The inclusion of a cop and speeder element is also weak, as are thedrifting and cash challenges, which all just seem half-baked. Multiplayer supports up to six, but is localWi-Fi only, and Streetpass support is limited to sharing best times.

Asphalt 3D looks ok, but definitely old school. The 3D effects add an extra level of depth, but the visualsstill look a generation or two behind. There’s an over emphasis on neon trails and shininess, althoughthe car models look good and the various tracks offer a variety of scenery to absorb.