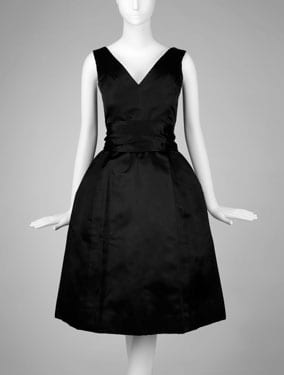 PROVIDENCE — Like a stiff vodka martini, taking the Rhode Island School of Design (RISD) Museum’s “Cocktail Culture: Ritual and Invention in American Fashion, 1920-1980” exhibit all in one gulp may result in lush fashion intoxication.

Upon entering the exhibition, visitors are greeted by classic black Christian Dior, as ready-to-wear today as when it debuted in the fall of 1954. Beyond the timeless silk and satin-weave masterpiece are seven decades, and more than 220 examples, of vintage decor and party-wear.

“‘Cocktail Culture’ traces the influence of the cocktail hour on fashion and design in the 20th century, from the flapper of Prohibition to the ultra feminine dresses of post-World War II to the spangled pantsuit of the disco era, and the accompanying designs for shakers and glasses,” said Interim Director Ann Woolsey in a press release.

The cocktail fashion of the 1920s and 1930s begins with the section “Mixed Company,” which addresses the mixing of both drinks and the genders behind closed doors. “The making of the modern drinker occurred during Prohibition, when those who enjoyed spirits gathered in private homes by necessity,” the wall label reads. “Shifted to a domestic setting, drinking, formerly the domain of men, became a pastime shared by women as well.” 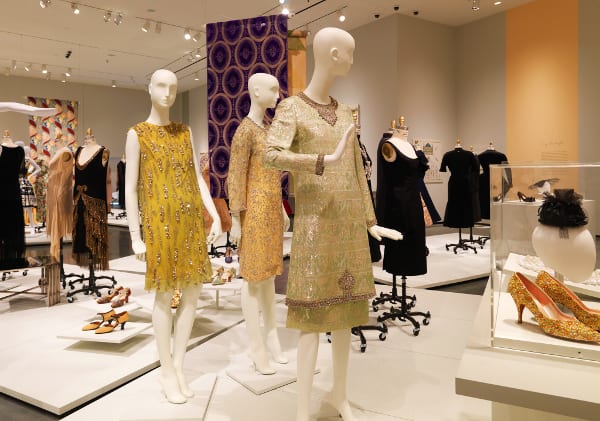 The above looks from the "Day for Night" section have simple silhouettes with fun embellishments. (Photo courtesy of RISD Museum)

Among several items, a silk evening dress with olive with red accents by Elizabeth Hawes, 1939, stands out boldly in this section.

While “Mixed Company” deals primarily with the cocktail party, “Urban Nightlife,” which also focuses on the ’20s and ’30s, is primarily devoted to the iconic flapper style. One item featured in “Urban Nightlife” is a silk beaded flapper dress with glass bugle beads, stamped metal sequins and rhinestones from 1925.

The cocktail style then focuses on travel-wear from the 1920s to the 1940s in the “Travel” section. “The luxury ocean liner emerged as a stage not only for introducing new drinks, but for acting out new attitudes and style of dress,” the wall label reads.

One featured item in this section is Russian designer Magda Polivanov’s green and yellow Mardi Gras ensemble from 1936.

Then comes “New Materials, A New Purpose,” which is devoted to the wartime styling of the 1940s and early 1950s. Rationing restrictions and more women in the workplace may be responsible for a movement away from “made embellishment,” such as embroidery, and toward the women’s suit. Featured here is a black acetate women’s suit by Jennifer, 1945. 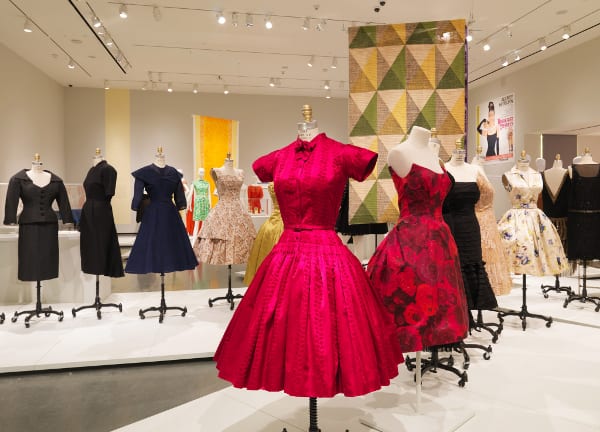 The rest of the ’50s, represented in “The Rules,” reflects the upsurge of wealth resulting from World War II and the American desire for Parisian fashion. The mission was to blend the extravagance of eveningwear with the casual comfort of daywear to create an ideal cocktail party dress. The cut and style of the ’50s cocktail dress continue to influence designers to this day. Here, a Gabrielle “Coco” Chanel strapless cocktail dress, black lace with a velvet sash from 1858, stands out among several others.

Fashion from “Day for Night,” spanning from the late 1950s through the early 1960s, is simpler in design and leaves room for “over the top” accessories. This combination demonstrates the necessity of the little black dress in every fashionable woman’s wardrobe. Here, a bold 1969 Norman Norell variant on the little black dress, a wool mini dress with a vast rhinestone Maltese cross, is featured.

Next, from the 1960s to the 1970s, came the “New Casual,” a reflection of the general movement toward informality in fashion. “The enthusiasm for outdoor entertaining inspired the imaginations of designers of furniture, clothing and barware,” the wall card reads. “Men’s and women’s garments worn in this milieu are aptly casual and often take inspiration from ethnic and folk dress.” 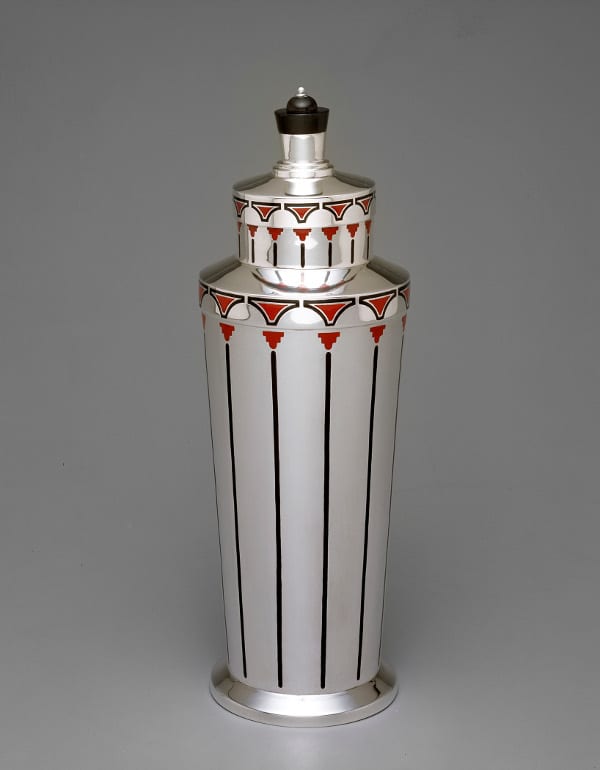 This sleek Charter Company cocktail shaker is from 1928. (Photo courtesy of Dallas Museum of Art)

A 1950s floral cotton halter dress with rhinestone embellishment by Yvette is featured among others in this section.

The final sub-section of “Cocktail Culture” explores the “International Set/Club Culture” of the late ’60s through the ’70s, where bold, polyester prints reign supreme. A multi-colored silk knit dress by Emilio Pucci, 1970, is featured.

“I never would’ve thought there would be so many high-end names,” said Isabel Westfield, of Providence, a viewer of the exhibit. “Valentino, Balenciaga, Dior, Chanel…I don’t know about you, but I’ve died and gone to vintage heaven.”

If you, too, seek heavenly solace in draping Valentino rhinestone chokers and Balenciaga feathered headdresses, RISD Museum’s “Cocktail Culture” is awaiting your first sip. The exhibition will run through July 31. Visit the museum at 224 Benefit St., Providence to see the exhibit. Call 401-454-6500 or visit the RISD Museum’s website for more information.