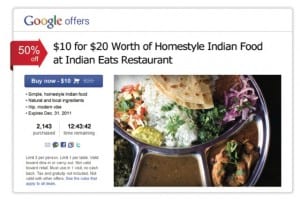 Google has added another service to its growing list of things they offer: Google Offers.

It is a direct competitor for Groupon, which was ridiculed earlier this year for the poor taste in super bowl commercials, but it also put them on the map of coupons and offers.

With an already growing number of sites offering similar or the same thing (such as LivingSocial ect.) can Google Offer really offer anything new to the table?

Google tried to buy Groupon for $6 billion just months ago. Groupon declined the offer and is preparing to launch an IPO at about $15 billion.

Well it appears that since Google couldn’t buy them, then creating their own service is one way of trying to beat them at their own game.

Can Google succeed? Or will Groupon or even LivingSocial, who already have an established customer base, will they still continue to succeed with the giant that is Google?