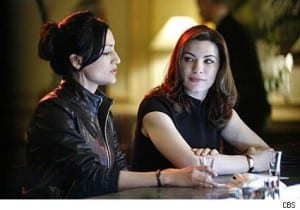 Sources confirm what other outlets are reporting, that “The Good Wife” is approaching a multi-year renewal despite low ratings that would seem to put it in danger of cancellation next month.

Now comes word that multiple members of the cast are locking up multi-year deals, and CBS is looking to renew the drama for not one, but two seasons.

This is becoming a trend for the net; it renewed “The Big Bang Theory” for three seasons this year and “How I Met Your Mother” for two.

However, “The Good Wife” is not a hit of that caliber; instead its limping along by averaging more than 12 million viewers Tuesday’s at 10 pm, but has lately been landing with just a 2.0 in the adults 18-49 demo, pretty terrible by network standards.

Stay tuned for an update.

Hey, follow me on Twitter. You’ll get news breaks, ratings commentary, and my thoughts on whether Starbuck was a Cylon.