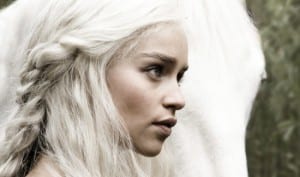 Apparently, I’m supposed to enjoy romantic comedies and Sex in the City. I must have missed the memo.

According to Ginia Bellafante’s recent New York Times review of HBO’s new series, Game of Thrones, (and follow-up) that’s all women are after in their entertainment. Therefore, the new Game of Thrones (based on the best-selling A Song of Ice and Fire novels by George R.R. Martin, of which I am a huge fan) is a story by men, for men, and won’t I please go back to reading about quiet-but-strong heroines trapped in struggling marriages and forget the whole fantasy genre ever happened?

But I’m getting ahead of myself. Background information is required.

I’m a girl. Always have been. I’m also a self-professed geek. I read science fiction and fantasy novels. I collect comic books. I spend my spare time thinking up zombie contingency plans. I’ve got most of The Lord of the Rings memorized (“Books or movies?” you ask. “Both”, I answer). When my friends and I do girls’ night, it’s to watch Firefly, not Dawson’s Creek. I’ve read the first four books of Martin’s A Song of Ice and Fire twice. I’ve even been known to play video games, though my college roommates –geek girls, to a man (pun intended)– put my gaming skills to shame.

I have and always will be a geek girl, and proud of it. So when I read this in the NYT review of Game of Thrones, I was rather offended:

“The true perversion, though, is the sense you get that all of this illicitness has been tossed in as a little something for the ladies, out of a justifiable fear, perhaps, that no woman alive would watch otherwise. While I do not doubt that there are women in the world who read books like Mr. Martin’s, I can honestly say that I have never met a single woman who has stood up in indignation at her book club and refused to read the latest from Lorrie Moore unless everyone agreed to “The Hobbit” first. “Game of Thrones” is boy fiction patronizingly turned out to reach the population’s other half.”

The fantasy genre is not for everyone, and that’s fine. But to directly insult the rather large and outspoken community of geek girls who love it is just, well… insulting.

I was under the impression that this was 2011, and educated people no longer embraced harmful gender stereotypes. Little boys can wear pink now and little girls can play with trucks and no one will think less of them for it. Or did I miss something and we’re still living in the 1950’s?

Yes, gender stereotyping is alive and well and it’s being perpetuated by the acceptance of the idea that fantasy is for boys and girls should go back to watching their soap operas and Gray’s Anatomy.

This sweeping generalization (as they usually are) is wrong.

The utter condescension that drips from the page with the words “While I do not doubt that there are women in the world who read books like Mr. Martin’s” implies that not only does Bellafante think that fantasy is a genre no self-respecting woman would enjoy, but that the few women who might enjoy fantasy are off their rockers.

In other words: If you’re a geek girl, there’s clearly something wrong with you.

Such is not the case, and I’ll turn to the Almighty Interweb to tell you why. Do a quick Google search of any fantasy, science fiction, or horror genre fiction and you will find reviews by women, and lots of them. Not only that, but you will find blogs and forums and fan communities and news sites by women with the express intent of celebrating that genre fiction. Geek girls have a mighty presence, and it’s evident in their online communities, at book signings, at movie premieres, and at conventions. The fact that Ms. Bellafante claims to never have met a geek girl just proves that she moves in very limited social circles. 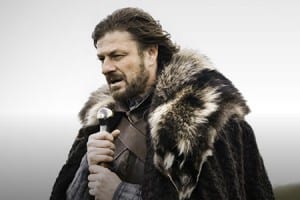 And these geek girls? They’re not atypical of their gender. They’re not the shy outsiders and weirdos Bellafante makes them out to be. Intelligent, hilarious, talented, sexy, famous, and successful women count themselves among the ranks of geek girls. Jane Espenson, Felicia Day, Daryl Hannah, Olivia Munn, Gale Ann Hurd, Ursula Le Guin… Hell, science fiction doesn’t have a father: It has a mother, and her name is Mary Shelley.

Referring to Game of Thrones as “boy fiction” also shows an inherent lack of respect for the genre. She didn’t say “man fiction” or “fiction for a male audience.” She used the word “boy” with derision, and referenced Dungeons and Dragons later in the review. So not only is fantasy not something a refined woman would be into, but it’s also not something a grown man should admit to watching either. It’s only acceptable entertainment when you’re pimply, anti-social, and living in your mom’s basement (which is in itself a stereotype).

No, Game of Thrones is exactly the kind of genre fiction geek girls are clamoring for. Geek girls are a force to be reckoned with, and it shows in the ratings. Do you think Lord of the Rings would have done half so well in theaters if only 50% of the population was interested in seeing it? Would The Walking Dead have been the instant success it was if women hadn’t been watching it in droves? The times they are a’changin’, and geek girls are demanding that their needs be met with more quality fantasy and science fiction on TV.

But perhaps Bellafante’s sexist (yep, I said it) opinion stems from lack of research. A cursory glance at the Wikipedia page for Martin’s books reveals that the “illicitness” (read: sex and nudity) the reviewer believes was thrown in to attract a female audience is actually true to the book. Her lack of research shows again in a decidedly able-ist moment later in the review when she refers to Game of Thrones being in the “universe of dwarfs, armor, wenches, braids, loincloth.” The dwarf she is referring to is of course Tyrion Lannister, played by Peter Dinklage, who is not some mystical creature like Tolkien’s Gimli, but an actual human born with dwarfism, just like the millions of little people who go about their daily lives in our own universe.

Which brings me to my next point: As far as the genre goes, Game of Thrones is fantasy-light. It’s fantasy for people who prefer political intrigue and The Sopranos. It’s fantasy for those who are tired of fantasy and looking for something fresh and new. There are no wizards, no magic spells, no elves (go find your own franchises, Legolas and Dobby), no unicorns, no time travel, no magic talismans (well, mostly). When it comes right down to it, Game of Thrones would appeal more to fans of Philippa Gregory than Terry Brooks. So if girls aren’t supposed to like fantasy, then wouldn’t that make Game of Thrones kind of ideal?

The disrespect shows a failure to understand a basic trait of the geek girl, and that is this: We’re individuals with –gasp!– our own individual tastes and opinions. Geek girls are looking for something different in their fiction. They’re looking for the metaphor offered by fantasy, and for the real-life relationships and themes that can be just as poignant in Game of Thrones as they can be in a Jodi Picoult novel.

Not every woman loves Desperate Housewives. Some do, and that’s just fine. By the same token, some women like their fiction served with a sword and a quest and on horseback. There is no qualitative difference between the two except where we insert one.

Fantasy: It’s not just for the boys, and it never was.