Check out the spoiler-filled review of Scream 4, including analysis of all the victims and what this means for the franchise going forward.

The lights go down, that familiar creepy ringtone buzzes, and we’re right back in Scream. Haven’t they changed ringtones in Woodsboro since 1996?

Sidney Prescott (Neve Campbell) has returned home on the 15th anniversary of the original murders, only to see Ghostface return and start murdering the local high school kids, friends of Sidney’s cousin Jill Roberts (Emma Roberts). So now Sidney has to find and stop the killer before the only family she has left, and all of Woodsboro falls victim to his blade.

Gale (Courteney Cox) and Dewey (David Arquette) are back as well, along with the writer of the first two films. The premise is great; the film’s got catharsis, a great cast, a fresh take, and tons of young nubile victims to off. Its young cast is excellent, and it delivers one of the more chilling twists and memorable killer motivations. Its clever riffs on the horror genre of the last decade are solid and in keeping with the humor of the original trilogy.

Campbell is likable as ever with Sidney, whose character has nicely progressed over the course of the series. And while Cox and Arquette each slip effortlessly back into the roles, it’s Panettiere who steals the show. She carries the weight of each scene she’s in, and believably conveys her character’s every motivation be it bravery, insecurity, fear, or humor.

Despite this, “Scream 4’s” grasp never quite matches its reach.

Scenes dependent on Roberts’ gravitas fail and drag down the movie. It’s a shame too since she’s essentially supposed to be the Sidney of the new generation; a better actress would have turned in a more moving performance and the film would have been better for it. That’s the second time in less than a year you could say that of a film starring Roberts. 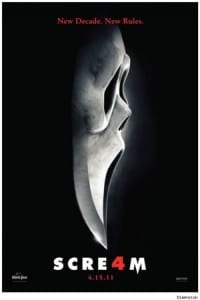 The film comes off the rails in the middle, as it tries to juggle too many characters, plots, histories and produces nothing to show for it. The movie tries to connect its older cast to the younger cast and fails miserably. While Sidney is nicely anchored to the group through her relationship with her cousin, everyone else feels superfluous and jammed in, and the plots to engage them feel forced. Even the wonderful Mary McDonnell is essentially useless due to poor writing and editing.

Gale and Dewey are frustrating in the film; Dewey’s role is essential in only that he’s the sheriff, and most of his time is spent receiving a phone call then racing after the killer. Gale pops up every few minutes for comedic relief and to create dramatic tension as to highlight a red herring. Otherwise, their parts in the film are minor and pace-bogging until the big climax, when the film finally but briefly feels like part of the Scream franchise.

The film suffers from poor editing, poor plotting, and poor direction. But a strong (if poorly used) cast (excluding Roberts) helps to make up for its bloated and bogged down middle, which is bookended by one of the series best openers, and one of the more outrageous closing confrontations.

It’s clear from the trailers and what ultimately ends up in the film that a lot was cut from the film, and given recent publicity over confrontational meetings between the writer and the studio, the film seems to have gone wrong due to an ineffective and bloated script. A little finetuning, and some upgrades, and this could have been one of the finest films in the Scream franchise, as opposed to the weakest.

The film repeatedly tries to bill itself as a reboot — even the killer(s) tries to make that assertion. And in many ways, it’s just like the reboot craze of the last decade. Except Scream has been rebooted into a foreign world that’s not as fun as the original, with too many homages that don’t carry any weight.