It’s likely that you don’t consider yourself a square. You might even like to be a nonconformist like myself. So what happens when an opportunity arrives that allows you to purchase a new vehicle for the better good of dear, old Mother Earth? Well, you do your research, of course.  And what will be the best for you and the planet isn’t necessarily a Hybrid like everyone else who jumps on the Green Team. We’re not talking Hybrids or electric but good ole’ diesels.

American drivers have carved in their minds a preconceived notion of a diesel automobile. It’s that loud, black smoke cloud following an ancient Mercedes at the end of the block, driven by the weird lady who happens to have way too many plants in her yard. This is a shame because today’s diesels are nothing what they once were. If you happen to fall in the 35% of people surveyed by PACE who would consider a diesel, then you’ve done your homework and wouldn’t turn your cheek to the possible 20-40% increase in fuel mileage. Apparently, that fact has caught the attention of consumers, because diesel automobile sales doubled in 2010.

Both diesel and gasoline come from the same source, but diesel is cheaper to make, produces lower emissions and slower burning. But since 2004, diesel has cost more than gasoline, which has resulted in less Americans wanting to pay the extra for a diesel powered automobile, even when long term facts are presented.  When Audi introduced the Q7 TDI, it came with a public awareness campaign about the positive effects clean diesel can have on America’s dependency on foreign oil. A U.S. EPA study found that if one-third of Americans fueled their vehicles with clean diesel instead of gasoline, the United States could send back 1.5 million barrels of foreign oil per day. At a time in our history where our dependency on conventional petroleum is at its highest, the need to find other sources besides petroleum based engines will continue. But when diesel is such a viable alternative why have we not jumped on the same band wagon that nearly 52% of Europeans have?

The average price for a Hybrid vehicle ranges from $19,000 – $25,000, which isn’t harsh and may even qualify you for a federal tax credit for hybrid vehicle owners. However, Edmunds.com found that most the high sales prices, insurance costs and related expenses will offset the savings. In the first five years of ownership, a hybrid can cost as much as $5,283 more than its non-hybrid counterpart. Edmunds.com analysts also determined that gas would have to cost at least $5.60 per gallon for hybrid drivers to break even if they drove 15,000 miles per year over the five years.  Electric vehicles are improving, but look at the Nissan Leaf: it has an msrp of $32,780, but finding one that hasn’t received a dealer mark up (even with the rebate) still seems pretty steep. The Chevrolet Volt has an msrp of $40,280 but like the Nissan, will have a dealer mark up plus a rebate, which still translates to a big chunk of money for a car you have to charge overnight. The offset cost of charging the cars is minimal based on their battery sizes and the average U.S. per KWH we pay for electricity, but most homes will require a special meter to charge them.

While Japanese manufacturers have focused their time on Hybrids, Europeans have focused on how to manufacture and deliver diesels at a lower cost, because they’ve been serving that market for years. Strict U.S. emissions limit the variety consumers have to pick from, thus making diesel options a minority market because the cost to manufacture a “clean” diesel for U.S. standards isn’t exactly cheap. Together with the normal manufacturing costs that are required in order to produce diesel engines translates to higher initial upfront cost. It takes longer to pay back especially with the average 51.4cents a gallon tax each state carries on diesel fuel. However, take the Audi Q7 TDI clean diesel for example. It delivers 30% better fuel economy and reduces carbon emissions by 20% over gasoline. The TDI allows you to travel up to 600 miles with 12% more power in each drop of diesel. Earthdaycoalition.org found that “a typical well-made Honda Civic if properly maintained, it is believed that the typical service life of a Civic is roughly 200,000 miles (7,500 engine hours) under the rough conditions of the typical suburban commuter (based on 45% highway driving, 55% city driving).  However, an equally well-built Volkswagen Jetta TDI has an average service life of 400,000 miles (15,000 engine hours) under those same conditions.  2010 Volkswagen TDI buyers are even eligible for a tax credit up to $1700 if the automobile was purchased before December 31 2010. Making the upfront average spent on a diesel worth it in the long run.

Currently Audi, BMW, Mercedes Benz and Volkswagen are the only automobile manufacturers in the U.S to offer cars with diesel options. Their fourth quarter sales show diesels outselling their gasoline versions, and in the case of the Volkswagen Jetta, buyers chose the diesel version 5:1 in 2010. Volkswagen hopes to have 30% of their U.S. sales to be diesel by 2018, and with the Touareg TDI, Jetta TDI, Jetta Sportwagon TDI and Golf TDI, they offer plenty of options to suit any buyer. Audi led with 48% of their 2010 sales being diesels, with their top selling A3 TDI and Q7 TDI. Audi wants a diesel option in most U.S. lineups by 2015, which will include the Q5, A6, A8 and A4. BMW offers the diesel in two models, the 335i and X5i, which resulted in 35% of their 335 sales being diesel. “We believe diesels have a future in the U.S. By 2014, between 10-20% of our mix will be diesels,” said Jim O’Donnell, president of BMW North America. Now Porsche is considering selling the Cayenne SUV and Panamera in diesel versions in the U.S. – their biggest single market. In Europe, diesel and Hybrids make up 30% of the Cayenne sales. 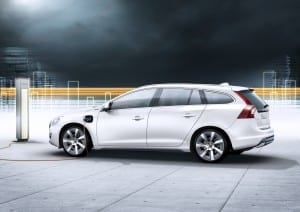 Volvo recently announced the V60 Plug-in Hybrid which is also a diesel giving you the best of both worlds when it comes to efficiency, ultimate fuel mileage and a minimal carbon footprint. The V60 will come equipped with a 2.4-liter five-cylinder turbo diesel coupled with a 70-hp electric motor on the rear axle. “One important aspect of the project was to retain the Volvo V60’s excellent driving pleasure, high safety standard and luxurious comfort. At the same time, average CO2 emissions and fuel consumption will be halved compared with what is available on the market today”, says Stefan Jacoby, President and CEO of Volvo Cars. “We’re taking a giant step forward towards our “DRIVe towards Zero” vision, that is to say the hunt for zero emissions. In fact, when the V60 Plug-in Hybrid is run solely on electricity and recharged using renewable energy, we’ve already reached that goal.” It is still unknown though if the V60 Hybrid will reach the U.S. next year.

My 2011 Volkswagen Jetta TDI, who is named Hans, just might be the love of my car life. Stickering in at just a little over 25K, it has everything but navigation and isn’t ugly by any means. Bonus is the fact it averages me $50 each tank of fuel which equals around 500 miles in the city alone. I like to read TDI Tank Wars which further prove that averaging over 50mpg isn’t farfetched among many different types of drivers. If you’re like any American who loathes modern gas prices, you may just become smitten with driving a diesel for this one reason alone. I know my pocket book and the planet thank me for pulling on my Green shoes.