Lanford Wilson’s “Book of Days” is a folksy kind of play. It’s about the mores of a small town in Missouri. 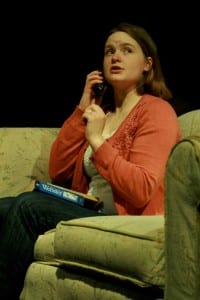 Its characters introduce their home “Our Town”-style. Its plot revolves around a community theatre production of Shaw’s “Saint Joan” and a dark battle of the running of the local cheese plant.

Bad Habit’s production, staged at the Central Sq. Y., is also folksy. It lacks polish, it’s a little uneven, but it’s engaged storytelling with some standout actors, in an intimate space, and it does its job. “Book of Days” is essentially a mystery story, and grabbing a seat at this production is like grabbing a better-than-run-of-the-mill mystery novel off of the discount rack.

Structurally, the play is bit strange in that there’s never much doubt about who has done wrong. Still it manages to be gripping. The question that holds one in suspense is whether or not Ruth (Anna Waldron), a strong, independent-thinking woman, can bring the truth to light in her conservative Christian town.

Ruth is emboldened in large part because of the experience she is undergoing in her struggle to portray Joan of Arc in a small production led by a big-shot director who has just (mysteriously) blown into town from L.A. (Stephen Radochia).  To right a wrong and save the career of her endearingly liberal, industrious and slightly goony husband (Joe Rucio), she must go up against an old-boy network which includes the Church, in the person of one Reverend Gomes (David Lutheran) and James, a young titan of the business/political world played with commendable, skin-crawling creepiness by Casey Preston.

As these locally powerful masters of glad-handing and upright speech rally the townsfolk against her, can Ruth convince the town Sheriff (Harry McEnemy) she’s discovered something amiss that he has overlooked?  Or will she end up like woman on women on whom her courage is modeled?