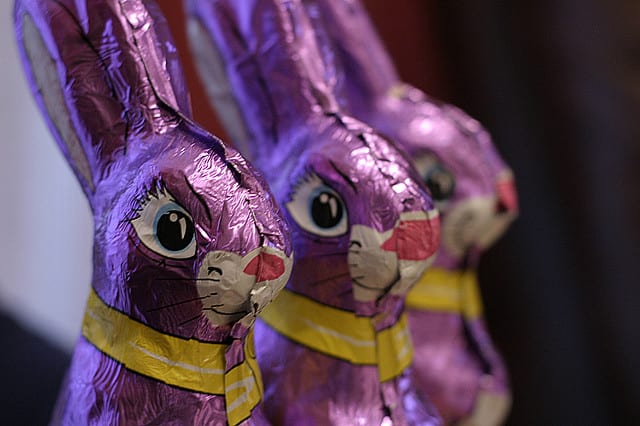 Many people are aware that conventionally grown produce is covered in pesticides. Documentaries such as Frontline’s “Modern Meat” and websites such as PETA’s www.meat.org have showed us the horrors of the meat industry. It may be common knowledge that the food industry has a shady side, but it’s still somehow shocking to consider that the adorable chocolate rabbit you were about to bite the head off of may not be so innocent after all.

Giselle Achecar, the life force behind the “eco-edutainment” site Eco-Rico, is passionate about bringing the darker side of the chocolate industry to light. In her Web TV series, Achecar comes across as the younger, sassier, (definitely more caffeinated) version of Paula Deen that you’d like to grab a drink with. What sets both Achecar and Eco-Rico apart from other environmental activist websites is the fact that they are fun. Achecar admits that the topics she discusses can be pretty heavy, but insists that the best way to get one’s message across is through enthusiasm and energy.

First, the bad news: In that West Africa is still predominantly rural, agriculture accounts for 25 percent of its regional GDP, with more than half of jobs based in that sector. Cocoa is the region’s main agricultural export. It is typical for children to work on family farms, and so long as the work is not deemed dangerous and/or preventing a child from attending school, it is not considered child labor. However, the International Labour Organization estimates that 74 million child laborers ages 4 to 15 are engaged in hazardous activities, with 69 percent of those children working in agriculture.

A 2009 publication from the Organisation for Economic Co-operation and Development states, “Recent studies in Ghana and Cote d’Ivoire show that nearly half of all children living on cocoa farms have been engaged in at least one hazardous activity. These include carrying heavy loads, spraying fertilizers and pesticides or cutting trees. In addition, some children have been trafficked from other regions of the country or neighbouring countries. This practice is one that international conventions recognise as criminal.”

So what does corporate chocolate have to say? While representatives from Cadbury (owned by Kraft) and Nestle could not be reached for comment, their websites do address the issue. Cadbury’s site says, “Kraft Foods is involved in substantial efforts designed to ensure that children are not harmed in cocoa farming and worst forms of child labor are eradicated.” Nestle’s site says something similar, claiming, “We fully support the United Nations Global Compact’s guiding principles on human rights and labour and aim to provide an example of good human rights and labour practices throughout our business activities.”

With rhetoric effectively dropped, the issue at hand is still unresolved; protocols, organizations and corporations may claim to have the best of intentions, but child labor is still being used to produce chocolate.

Thankfully, Achecar reminds us that supporting such practices is completely avoidable. While she refrains from lauding one brand over another, she does emphasize the importance of making sure any all chocolate purchased is fair trade certified. Ultimately, this ensures three things: the product is produced in an environmentally sustainable fashion, the workers are paid fair wages, and no forced or abusive child labor was involved. Purchasing fair trade items is an incredibly small act with an incredibly large impact.

In addition to being better for the world, fair trade chocolate is also better for you. “Chocolate is one of the most complex foods,” Achecar said. “It has over 300 identifiable chemical compounds that are proven mood-lifters.” In order to benefit from these compounds, chocolate has to be 70 percent cocoa, otherwise the added milk and sugar diminishes the effect.

For more information about the health benefits of fair trade certified chocolate and for delicious recipes using it, go to eco-rico.com. Further information on child labor and cocoa can be found at www.ilo.org, and information regrading Fair Trade is available at www.transfairusa.org.