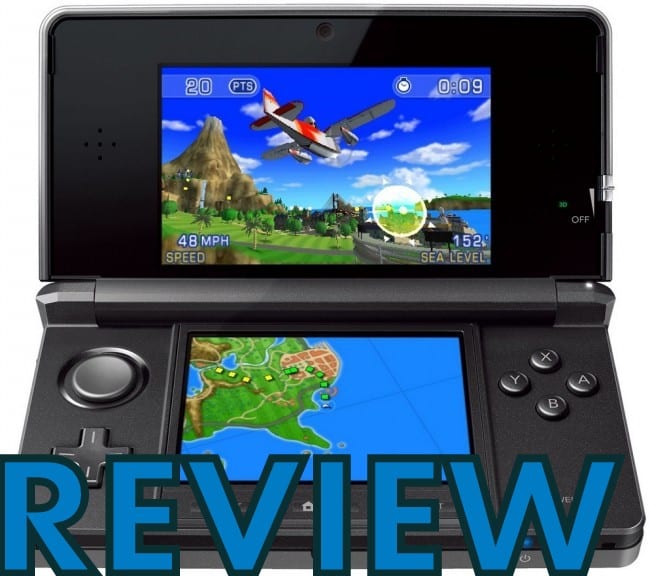 With the launch of the Nintendo DS, Nintendo raised the ante for innovation thanks to the inclusionof both dual screens and a touch screen. Now, the company has created the first mainstream use ofglasses-free stereoscopic 3D. The question, of course, is does 3D actually enhance the experience ofplaying games on the go.

For gamers who appreciate what 3D offers, Nintendo has released an impressive piece of technologyin a tiny package.

The handheld sports a 200 MHz GPU, which in comparison to the iPhone or averageAndroid-based device seems positively anemic. The 3D-capable top screen measures 3.53 inch andsupports a widescreen resolution of 800×240 pixels. The touch screen is 3 inches and sports a lowerresolution. Unlike the DS, that’s a wide difference between the two screens, so games that utilize bothscreens for gameplay (like Contra 4) seem unlikely.

Regardless, the main screen certainly produces excellent visuals. Without a doubt, Nintendo’stechnology works. The 3D effect is superb when used well. The 3DS can clearly provide images withan amazing sense of depth and dimension. The graphics are crisp and colorful, and on par with theGamecube and even the Wii. The 3D effect is a bit finicky though. You have to stare at the screenstraight on, and hold it still, or else the picture breaks up into a ghosted double image. There’s a handyslider bar to the right of the screen for adjusting the intensity of the 3D effect, or just turning it off.

The entire unit is actually smaller than the DSi, so it’s easy to slip into your pocket and take on the go.The 3DS supports 802.11 Wi-Fi and relies on its wireless abilities more than any other Nintendo gamesystem—even the Wii. Between the potential online gaming abilities, more streamlined friend codesystem, the new Streetpass mode, and, of course, the upcoming 3DS store, the 3DS should prove to be avery connected handheld.

Granted, the DSi had most of these features and could play games online, but it lacked a convenientway to create a friends list—the archaic friend code system Nintendo insists on using was actually gamespecific on the DS. The 3DS uses a system-specific code, so you only have to give your buddies a singlecode to connect with them.
The store, ability to browse the web, and the much-anticipated option to finally transfer DSi storepurchases to your 3DS will supposedly all be available in May. Right now, the online abilities of thesystem are nearly non-existent. Few of the launch games even support online play, but it’s clear that the3DS, once updated, will offer a level connectivity hitherto unseen from Nintendo.

The biggest feature of the 3DS next to actually being 3D is the Streetpass mode, though how useful thiswill be in actuality is up to speculation. When the system is in sleep mode, it can detect other sleeping3DS systems and connect to them. For games that utilize this functionality, this leads to data and bonusexchanges. In Super Street Fighter IV 3D Edition, for example, teams of character figurines you collect will actually fight AI battles with other 3DS teams. The winner will open their 3DS to reveal newly earnedbonuses, coins, and other goodies.

Streetpass is an intriguing attempt at essentially anonymous social gaming, and Nintendo at leastdeserves props for devising a creatively cool feature. How much use developers make of this abilityremains to be seen.
The inclusion of an analog nub is another improvement over the old DS. It’s a comfortable stick thatallows for more advanced controls, since movement is no longer confined to the D-pad. Other thanthat, the layout is identical to the DSi. The Wii-like graphic user interface is further refined as well. Thescrolling, icon-based menus are easy to navigate, although a few of the system options are somewhatburied.

The 3DS also sports an in-depth Mii creation system, just like the Wii. It can even create a Mii based on a head shot, which makes creating the little figures quick and easy. Wii owners will instantly recognize theMii Plaza as well for showing off collected Miis, though their use is still mostly a gimmick. The onboardcamera can take 2D or 3D shots, and, just like the DSi, has front- and back-facing cameras.

While the ability to take 3D photos is great, the resolution is painfully low, so you’ll likely only be viewingthem on the 3DS. The cameras are also used for Augmented Reality (AR) applications. The 3DS comesstandard with Face Raiders, a fun first-person shooter that creates floating heads based on photos, andthen requires players to move around the room while staring at the screen to find and shoot the heads.

The 3DS also includes a set of AR cards in the box. These cards mostly just create a 3D image of popularNintendo characters overlaid against your environment, though one of the cards also offers a few simpleAR games. It’s all a gimmick, but still amusing—especially for kids.

As great as the overall hardware is, there is one major flaw—the battery life. DS owners have long cometo expect insanely good battery life out of their systems. With the 3D and Wi-Fi on, the 3DS can maybeaverage four or five hours on a charge. To help minimize this inconvenience, a charger dock comesstandard.

The line-up of launch titles hasn’t exactly been met with unbridled enthusiasm. While the 3DS’sofferings aren’t terrible for the most part, they’re also not great. Capcom’s Super Street Fighter IV 3DEdition is probably the all-around champ. It offers terrific graphics and gameplay, online multiplayer, andStreetpass support.

Namco’s Ridge Racer 3D and Asphalt 3D are both surprisingly good, if old school racers, and Nintendo’sPilot Wings Resort is a fun, if shallow casual flying experience. It’s just a shame that Nintendo didn’thave anything in the way of what players really want at launch. The 3D release of the N64 classic,Legend of Zelda: Ocarina of Time, is due this summer, but there’s no Mario, Smash Bros, Mario Kart, orMetroid. Worse, none of these beloved franchises are likely to appear any time soon.

As it is, early adopters will have to satisfy themselves with ports of Super Monkey Ball, Bust-a-Move,Nintendogs, and a few other popular regulars. Nintendo claims to have had the most successful hardware launch ever with the 3DS, but whether that will translate into improved support fromdevelopers remains to be seen. If developer are willing to invest in the potential of the 3DS over thesecurity and cheaper development costs of a regular DS game, future releases might just live up to thehardware’s bright potential.