To say that the 3DS’s launch titles have been mostly disappointing is something of an understatement.Most of the games seem to have been shoved out just a tad too quickly, and been a bit lacking. So, Capcom deserves immense kudos for their portable rendition of Super Street Fighter IV. In short, it’s an amazing port of the console game, with very little

The 3D edition of SSFIV isn’t any kind of quick and dirty port just to get something out in time for launch. Capcom has made as few concessions as possible in fitting the game into the tiny 3DS, and it shows.Character models are well-animated and gorgeous, making them amazingly close to the 360 and PS3versions. The 3D effect adds a great level of depth to the visuals, and special effects have been pumped up to look even cooler. The backgrounds have been greatly simplified, which might annoy hardcore SF fans, but that’s a minor compromise.

More amazing is that the 3DS version boasts 35 playable characters—including two new additions—right from the start. The refined balance and moves list from the console versions is completely retained. So, while there’s a wide array of fighting styles available, the gameplay is so well balanced that no one character has a true advantage over any other. That said, the end boss is still amazingly cheap.

The single-player arcade mode has a vague storyline for each character, and the difficulty level settings can be adjusted to accommodate any level of player. On the medium and especially harder settings, the AI is remarkably adept at kicking butt. Of course, single play is merely the training ground for fighting game fans and multiplayer manages to take center stage here.

Capcom has taken their expertise in online fighting to heart and provided 3DS owners with a superb outlet for fighting players across the country and the world. Matches in general are completely smooth,with only occasional lag based on your connection. Games are easy to find and start, and this is one of the few 3DS games that shows off its online potential.

The game even uses the StreetPass mode. Playing the game earns you figurines of the fighters (or you can purchase them with StreetPass coins), which are used to form a fighting team. When a 3DS in sleep mode passes another unit using this mode, it will actually start an AI-controlled team fight, where the winner earns more goodies. 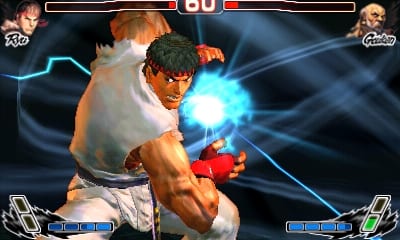 The one major complaint with any of the online functionality is the lack of a leaderboard where you can post bragging rights, or just check out the competition. Beyond that, the only real problem with Super Street Fighter IV on the 3DS is the obvious one: the controls. Capcom has made the game as playable as it could be. Unfortunately, neither the nubby analog stick, nor the D-pad is ideal for hardcore fighting and having to use the shoulder buttons to completely emulate the six-button arcade layout is problematic.

That said, the game still controls excellently overall. To compensate for difficulties with special moves, SSFIV uses the touch screen to allow players to instantly pull off special moves. It’s a good compromise.Expert players can use the touch screen to simply have instant access to combined button presses, while novice players can have the one-touch system pull off the whole move.

Blast Factor: Aside from the fact that the portable controls can never replace an arcade stick, there’s little to complain about here. Super Street Fighter IV 3D is a remarkable fighting game in its own right,but also the best portable fighter on the market. It looks great, and the 3D effects add a superb layer of depth to the visuals. The controls might not be ideal, but the game is still easily playable, and thanks to the great online play, you’ll likely be brawling on the go for some time to come.