The Iraq war is hell; Specifically, it’s a modern-day Dante’s Inferno for a young soldier who’s been trained as a killing-machine, turned loose among civilians as a peacemaker, accused of war crimes and tried as sociopath. That’s the structure at work in Bill Cain’s provocative, grey-hued moral drama, “9 Circles,” the 2011 ATCA New Play Award-winner, currently in its final week at the Boston Center for the Arts. 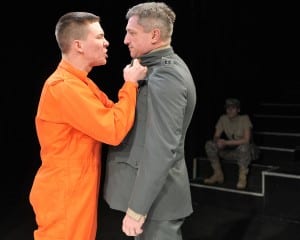 The fiercely engaging production staged for the Publik Theatre by director Eric Engel, uses a literal glowing white circle as its centerpiece. Daniel Reeves, the accused, remains anchored to this center ring, stepping out of one uniform and into the next as he is processed—interrogated and leaned on by a parade of authority figures whose motives are always up for questioning.

Reeves is played by Jimi Stanton. His performance is well paced and intense. In quiet moments, his plaintiff alternately pouts and smolders. His outbursts are sudden and all the more frightening for their quality of juvenile rebellion. Reeves looks young.  With his lean build, pallid complexion and boyish crew cut, he almost comes off as runtish—until the first time he strips off his uniform to reveal a physique that could have been carved out of marble. He has the perfect look for Reeves, a man-child who looks like he could have been plucked from the bench of high school lacrosse team. Reeves is naïve but intuitive, unschooled but clever. A troubled, overlooked kid forced into manhood before his time.

Reeve’s downward spiral features a  band of professionals who try to break him down, take him under their wings, and reshape him to suit their purposes. This collection of lawyers, soldiers and councilors are portrayed by two actors who change costumes in between a row of barracks lockers shrouded in shadow (yet still visible enough to distract at times). Amanda Collins, whos is similarly ambiguous in age, plays the women. While different in temperament from one another, they seem to be forced into desperately difficult roles a few years too soon. Will McGarrahan plays the men.  His characters blend into one another more; But it works. Possessed of the face, voice and bearing of a Mid-Western news anchor-type he is the play’s consummate male authority figure.

The effect of the familiar faces and voices in each varied role is surreal: a sense that in each scene, each descending ring, the same conversation is simply being rephrased, refashioned. Reeves has been accused of deeply disturbing acts. If the charges are true, who will be blamed and why? In whose interest is each verdict? That’s the question he and his audience must ask as he is caged, comforted and cajoled.

Is Reeves crazy in some way? Enough to excuse his behavior? More so then anyone else who has been traumatized? Is the military to blame? Commanding officers? The government? The System? We the people who support these institutions, who greet such atrocities with an eagerness to purge our guilt by finding and punishing a clear villain?

They’re questions worth asking, and in “9 Circles” they are forced through compelling, dramatic and dynamic conflicts.