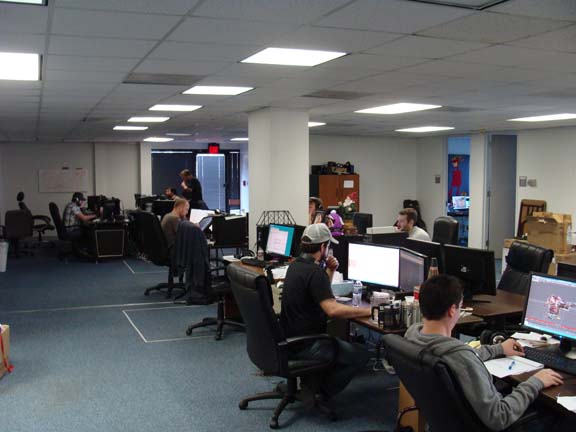 How do you know when your gaming studio has “made it?” When a fan sends you art of your characters in pornographic situations.

It’s been a different road than most for Austin, TX based indie developers Twisted Pixel, but it’s that road perhaps that has given them the freedom to create as they want to. Known for their quirky sense of humor, original characters, art and story, this is the true story of Twisted Pixel Games.

Things weren’t this way for the studio though. Founded by industry veterans  Michael Wilford, Josh Bear and Frank Wilson, Twisted Pixel was originally doing contracted work for the now defunct Midway Games (remember Blitz: The League 2 and NBA Ballers? Yep, those were Twisted Pixel). It wasn’t until 2008 that the studio announced that their focus was shifting, to digitally distributed titles based on their own intellectual properties.

The first of those releases came on January 21 of the next year with The Maw about a pair of aliens who crashland on a foreign planet, the idea for which was actually born years before. “ Years ago, Josh and I used to meet in our free time and just have a lot of fun creating different game ideas and stories while we ate things,” Twisted Pixel’s art director David Leung said in an interview to promote the game.”  After playing Ico, I was really inspired to create a game with story and characters that evoked empathy from players, so Josh and I started building on this idea and ended up with The Maw.  It’s something we just did for fun assuming nothing would ever come of it, so I was very surprised and excited when Josh called me up and told me that he pitched the game and that it was actually going to happen.”

Reception for The Maw was overly positive, but it wasn’t until later that year that the studio would have its first major hit. ‘Splosion Man was one of those titles that just came out of nowhere and it’s likely you heard of it first from your friends than many gaming publications. An addictive 2.5D platformer, ‘Splosion man followed the story of a being created in a laboratory and made completely of explosive material.  Players would use the character’s ‘sploding powers to reach new heights, escape the laboratory and of course…turn the scientists holding you captive into steaks. 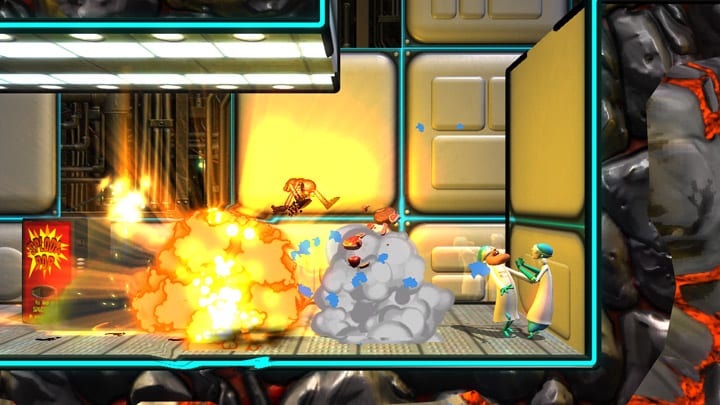 Much like The Maw before, ‘Splosion Man was created based on random ideas and story thrown around the Twisted Pixel office. “Sean Riley  (lead designer at Twisted Pixel) thought it would be funny to make a game where a dude splodes in a world only made of glass, since we love the idea of glass shattering all the time,” Twisted Pixel’s COO Josh Bear said of the game.  “From there, everyone joked about that concept until it was fleshed out into what is now on Xbox Live Arcade.” ‘Splosion Man was an undeniable hit for Twisted Pixel, selling over 39,000 copies on Xbox Live and getting the honor of being bundled with other games from the summer of arcade line as a full retail box title. And unfortunately becoming the center of a controversy with Capcom mobile.

“We are very proud of our characters and the little world we have built around them,” Jay Stuckwisch Twisted Pixel’s Marketing Director and 2D artist told Blast. “The nice thing about that is we can intermix things from past games into new ones, like little cameos here and there.  I think the advantage to this is that it keeps games new and fresh, and expands our universe, rather than constantly focusing on cash in sequels.”

Both The Maw and ‘Splosion Man, as well as the entire development team made an appearance in Twisted Pixel’s next game, Comic Jumper: The Adventures of Captain Smiley. Though it still featured the studio’s trademark art style and humor, Captain Smiley was something completely different for Twisted Pixel.  Following the adventures of the titular Captain Smiley and his genetically attached wisecracking sidekick Star, the game requires player’s to jump in and out of other comics to gain more popularity and features mechanics never before seen in a Twisted Pixel game including quicktime events and what many call the studio’s best writing to date.

Even with all of the success of their various characters, none one at Twisted Pixel would single one out as their personal favorite. “Our games are like our kids, we can’t love one over the other,” Stuckwisch told Blast slyly.

One would almost expect The Twisted Pixel offices to be one of comic insanity and constant shenanigans, much like Bart Simpson expected the Mad Magazine office to be when he visited New York City, but they too would be disappointed says Stuckwisch. “A day at TPG is a long one.  Granted we get to start a little later than most “everyday” jobs, but the nights can get pretty long, especially around crunch times.  Sometimes we are here until 2am or later.  A lot of time people work from home too.  I think the thing that may surprise readers most is that the studio is actually a very quiet place.  Everybody is so focused and working so hard that you could hear a pin drop most times.  However right now we are remodeling, so the sound of jackhammers and wall pounding is a little deafening.” 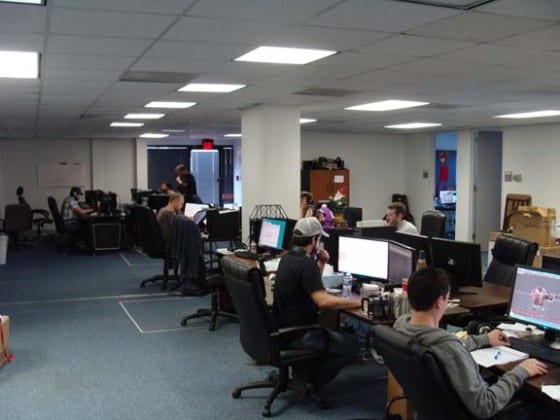 The staff at Twisted Pixel Games hard at work. Stuckwisch claims that the office is sometimes so quiet you can hear a pin drop.

2011 will be an interesting year for Twisted Pixel , as with their two new games, they’re both looking forwards and backwards. For the first time ever, Twisted Pixel Games will be releasing a sequel (though it’s sort of a spinoff) to one of its properties with Ms.’ Splosion Man, but Stuckwisch assures Blast that it’s not just ‘Splosion Man with a bow and it’s more of a labor of love for the project. “Ms. Splosion Man has been an awesome project for us to work on.  We had double the time to work on this game so we get to put all the stuff we wanted to in Splosion Man but didn’t have time for.” With the studio’s other project, it’s more uncharted territory, as the company announced that The Gunstringer will make full use of Microsoft’s motion sensing Kinect camera.

In Gunstringer, players take the role of a wild west marionette skeleton, controlling his movement with the left hand and gun with the right (though certain sections require both hands to be used as guns). “Gunstringer has been great, but a little intimidating,” said Stuckwisch. “ It is new territory, but the designers and programmers have been amazing with it and done some pretty cool things.”