“Source Code” is a science fiction film that will appeal to both sci-fi lovers and general moviegoers alike. The film combines elements from “Groundhog Day,” “Minority Report” and “Déjà Vu,” to form a parallel reality that viewers will surely play over and over again in their heads.

Jake Gyllenhaal delivers a great performance starring in the role of Captain Colter Stevens, a pilot stationed in Afghanistan who wakes up and does not remember where he is. Gyllenhaal finds himself on a Chicago commuter train sitting across from Christina Warren (Michelle Monaghan), who is talking and referring to him by a different name. Gyllenhaal is confused, and convinced that he is not the person she thinks he is until he goes to the bathroom and discovers the image in the mirror is not his own reflection.

When the train suddenly explodes, Gyllenhaal again wakes up in an unfamiliar place. Viewers share Gyllenhaal’s confusion as he tries to piece together what is going on. He eventually learns from Colleen Goodwin (Vera Farmiga) and Dr. Rutlege (Jeffrey Wright) that he is part of a military experiment and his mission is to find out who the bomber of the train is. Gyllenhaal returns to the train in the body of passenger Sean Fentress, and is able to relive the last minutes before the train explodes. While this is a seemingly convoluted plot, Source Code does a good job cluing the viewer in enough to alleviate frustration yet maintain intrigue.

Just as Bill Murray repeats the same day again and again in “Groundhog Day,” Gyllenhaal is sent back to the same time before the explosion over and over. Upon returning to the train the first time, he states it is the “same as the first train but different.” In the fashion of Déjà Vu, each time Gyllenhaal goes back, he tries to pick up on more clues to potentially alter the future. Similar to “Minority Report’s” premise to stop crime before it happens, the goal is for Gyllenhaal to find the bomber and prevent his next attack that could potentially destroy the city of Chicago. 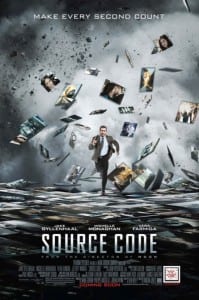 Initially it seems like watching the same incidents repeat themselves will get boring after awhile, but “Source Code” varies the plot just enough to make a “one trick pony” interesting. Viewers will take the journey with Gyllenhaal and find his thought process realistic and sensible.

“Source Code” throws another curve ball at Gyllenhaal in that he is only allowed to go back for eight minutes before the initial train explosion. According to Dr. Rutlege, the creator of the “Source Code,” the program is limited to how far memory goes back after death, similar to the glow of a light bulb that lingers after it is turned off. Although the particulars of how the program works are withheld from both Gyllenhaal and viewers, they are explained just enough for viewers to understand the gist and consider the film plausible.

With little comic relief, the film maintains the viewer’s interest as it creates suspense and finds ways to make the same eight minutes different and engaging. Gyllenhaal’s character is likeable and believable as he searches for information about the bomber and himself and sincerely attempts to fulfill his mission.

Directed by Duncan Jones, who also directed “Moon,” the film surprisingly does not focus too much on the science fiction element. However, the ending calls into question the logic and reason previously established in the film. But it will be up to viewers to decide if the experience was still worth the ride.