There is a paradox that exists in movies where not much actually happens. The lack of discernible action on screen makes you look closer, searching the screen for the signs of plot and action even more than in a movie where, say, there’s a lot of shit blowing up.

It’s true that sometimes, there really is nothing there, that the lack of plot is a false promise of deeper meaning. But there can be incredible movements and sounds in all that stillness and silence. Abbas Kiarostami meditates on this paradox, as well as many others in “Certified Copy”, the legendary Iranian director’s first foray to Western Europeon cinema.

“Certified Copy” is in itself a contradiction- it’s lusty and seductive but academic and occasionally overly-verbose. It soaks in the Tuscan sunshine where the story takes place but often seems cynical and cold. It stars Juliette Binoche as a frustrated, over-worked mother living in Italy who meets a British writer (William Shimell). He’s just written a book about the value of copies of original art. She’s an arts and antiques dealer. She asks to spend the afternoon with him to discuss his theory that copies have just as much value as originals. 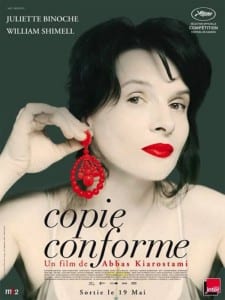 They travel to a small town in Tuscany where a woman mistakes them for a married couple. Binoche doesn’t correct her, telling her that they’ve been married for 15 years, he works too much, etc. As the day progresses he gets in on the joke, and they spend their time wandering around as a married couple, fighting and making up and reminiscing about their difficult life together.

Much remains unexplained- there was a small but vocal minority at the screening I attended who insisted on an alternate analysis of the couple’s relationship. Obviously both characters have experience in marriage, though how much, and to whom, remains unsaid. Both Binoche and Shimell act with elegant minimalism. Nothing much may happen in “Certified Copy”, but simply watching the luminous Binoche as the unnamed lead character is riveting. She plays an exhausted mother, a bitter wife, but with warmth and flair and raw sexuality. In one scene, she stands in front of a bathroom mirror, putting on jewelry and lipstick in an effort to attract her companian’s attention, and her nakedness is both uncomfortable and impossible to look away from. Shimell, an opera singer making his film debut, works the camera with grace and command.

Kiarostami ignores the traditional route of drenching his movie in sunlight the way most most films in Tuscany do, but allows the sheer natural beauty of the landscape to speak for itself. The lack of stylization, along with the academic chatter between Binoche and Shimell can seem a little dry or soulless at first blush, but the minute you look at Binoche and Shimell’s chemistry with one another, you realize that this just one more paradox: its simplicity is simply part of the seduction.