“When we dance, we want the music loud,” singer Maja Ivarsson belts on “Dance With the Devil,” the irresistible, anthemic second track on “Something to Die For,” the latest album from Swedish quintet The Sounds. She isn’t kidding. As the song’s marching band-esque intro gives way to a background siren effect, it’s clear the band is coming out in a fighting spirit. 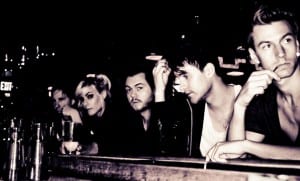 “Something to Die For,” their fourth album and strongest to date, represents a true evolution in The Sounds’, well, sound. It’s also the group’s first self-produced album, written and recorded in their own studio in Sweden. From the opening notes of the pulsating first track, “It’s So Easy,” it’s clear that The Sounds set out to make a record of out-and-out dance jams, incorporating more house and techno influences than have been seen on previous efforts.

With the exception of tender album closer “Wish You Were Here” (not a Pink Floyd cover), the songs are loud and fast – the perfect soundtrack to a sweaty night on the dance floor. “Won’t Let Them Tear Us Apart” pays homage to ‘80s shlock, and songs like “The No No Song” and its titular counterpart “Yeah Yeah Yeah” prove the band can still write singalong hooks like nobody’s business. Overall, it’s a nonstop party.

Throughout the album, Ivarsson’s voice is deeper and edgier than it typically is (at a recent show in Brooklyn, she came on stage defiantly smoking a cigarette, which may play a role in that), and even when she’s sounding vulnerable on tracks like “Diana” and first single “Better Off Dead,” there’s a certain attitude behind her delivery. The second line she utters, “You gotta seize the moment before it’s gone,” encapsulates the soul of the entire record. Ironically, “Something to Die For” is The Sounds’ most life-affirming record to date.