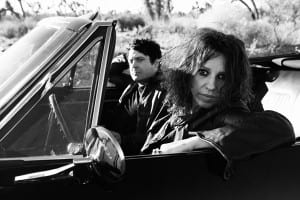 NEW YORK — When Blast first interviewed Linda Perry in April last year, we mainly focused on her life as a music producer since even though we all know her former band 4 Non Blondes’ song “What’s Up,” she has been very well known for working with many musicians (Christina Aguilera, Courtney Love, Adam Lambert, Pink and more) as a producer. When we asked her if there would be any possibility for her to create her own album and play shows again, she wasn’t really sure about that. A few months later, however, Perry stated on Twitter that she was going to form a new band. Eventually, with Fatso Jetson drummer Tony Tornay, she created a new band called Deep Dark Robot. Even before officially releasing their debut album “8 Songs About A Girl,” they started “It F!!cking Hurts” Tour. When they stopped by New York on March 25, Blast went to check them out.

We got a chance to ask Perry and Tornay how Deep Dark Robot’s been doing. And, needless to say, this time, we feature Linda Perry as a musician.

BLAST: How did you guys meet?

BLAST: Where did the name “Deep Dark Robot” come from?

TT: From a lyric Linda was writing about a robot trying to be human, “Deep dark robot falling in love.”

BLAST: “Won’t You Be My Girl?” was the first single from the debut album “8 Songs About A Girl.” Why did you choose this song as the first impression of the band for the public?

LINDA PERRY: Because we both thought it felt right. It was a mutual organic decision.

BLAST: I heard you made a video for each song in the album. Is that true? If so, how was the process of doing that?

TT: Yes, that is true. We are halfway through making them. It has been a really fun process.

BLAST: I watched the music video for “Won’t You Be My Girl.” It was very powerful, cool, and fun. That made me speechless. Can I just say, ‘WELCOME BACK!’ to Linda?

BLAST: The debut album just came out on March 22. Considering the album title “8 Songs About A Girl,” why 8 songs in total? Is there any reason?

BLAST: What was the inspiration for the song “Fuck You, Stupid Bitch”? I love this song but it does not sound like Linda is singing at all. Your voice is so different for this one.

LP: The whole album is about a girl, all of the songs have a different emotion. “Fuck You, Stupid Bitch” is basically just me letting go and moving on… The voice showed up with the song.

BLAST: Overall, the whole album is quite surprising. They are all love songs and it was unexpected, to be honest. Are those tunes based on your personal experience though?

LP: Yes, the entire album tells a story about a relationship that I went through and the all of the emotional things that one goes through when falling in love. I never got the girl and that will be a lingering emotion.

BLAST: When I interviewed Linda in April last year, you were saying that the whole idea of making your own record and doing shows was something back of your head, but not really a plan. Now, that’s what’s happening right now. What made you put the idea into action?

LP: I am having so much fun, I can’t believe it!!! I have felt lighter and more free than I have in years!!!!

BLAST: Can we expect to get to listen to some 4 Non Blondes songs or tunes from Linda’s previous solo albums at shows sometime?

LP: No. This is a band called Deep Dark Robot and we have our own songs.

BLAST: As a newly formed band who just started its journey, what’s the main goal that you want to accomplish this year?

BLAST: I asked Linda to define “Love” last time since it was the main topic that we talked about. This time, how would you define “Art”?

LP: Believing in yourself.