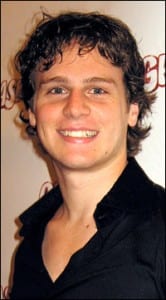 Jonathan Groff has just signed on to reprise his role as Jesse St. James on Glee, according to TVLine.com

Groff will appear in the final three episodes of the season, apparently intent on winning Rachel back.

Groff first appeared as St. James in the first season of the popular show, playing the charismatic lead of a rival glee club and a love interest for Rachel.

However, much of St. James character was muddled through often conflicting storylines.

Groff and Lea Michelle go back further than “Glee;” the two starred together in the original Spring Awakening.