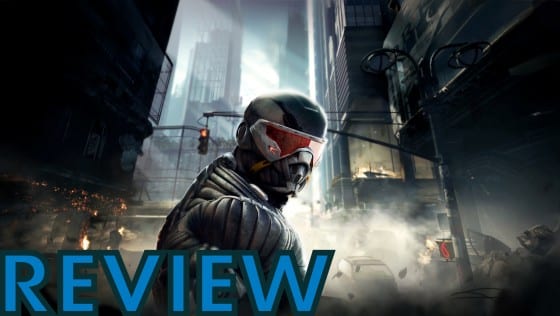 If nothing else, 2011 will be marked as a great year for first person shooters. Killzone 2 and Bulletstorm have been burning virtual ammo with aplomb, but perhaps they were merely the opening act to the main attraction—Crysis 2. The original Crysis was a PC-only release known mostly for its hardware-crippling requirements. The focus of how much raw CPU and GPU power Crysis needed to run overshadowed just how great the game actually was.

Crysis never made it to console systems. So, it’s likely that most gamers who jump into Crysis 2 won’t have the

experience of the first game to guide them. Thankfully, that’s not much of an issue. While the game certainly has historical ties to the original, you won’t feel like you’re missing anything substantial by not having experienced part one of what is apparently due to be a trilogy.

Going cross-platform has helped immensely to streamline the game mechanics. The original’s convoluted controls are gone, replaced with an elegant and intuitive method for using the super-human abilities of the protagonist’s nanosuit. Interface changes aside, the focus of Crysis remains on intense action in huge areas while utilizing different tactics to take on the enemy.

In the spirit of big budget action movies, Crysis 2 starts with a bang. Players take the role of Alcatraz, an otherwise-nameless grunt sent in with his squad to extract a scientist from New York City. Far from the bustling metropolis it used to be, New York is a burning husk. A rampant alien plague has wrecked havoc through the populace, killing thousands. An alien race called the ceph has invaded and entrenched themselves into the city’s underbelly. Finally, the heavily-armed internal security troops of the corporation behind the suit’s development are searching high and low for you.

This three-way fight dynamic plays a huge role through most the game. Although the environments aren’t as huge as those from Crytek’s previous games, Crysis 2’s rendition of NYC is stunning. The levels generally feel huge and offer an incredible variety of urban settings. You’ll fight on rooftops, ground levels, in buildings, and sewers. Almost every level offers a variety of ways to take on the combat.

The suit will inform you of specific tactical choices and their locations. Switching to the visor mode enables a HUD display that points out specific points you can use to approach a situation with stealth, sniping, flanking, and other tactics. Even without such promptings, the abilities of the suit enable players to utilize an incredible number of combat styles.

The main functions of the suit are armor and stealth modes. Armor mode lets you take heavy damage and high falls. Stealth mode turns on camouflage that makes you effectively invisible under most circumstances. The suit also lets you run and jump at a superhuman level, and see the world with thermal vision. All these abilities cost energy, so you have to use them strategically. 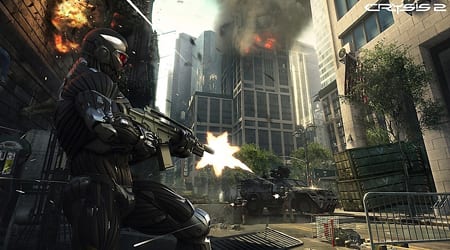 The suit recharges its energy fast, but frequently finding cover to duck behind and recharge is a necessity. This ability to use stealth or run and gun tactics at virtually anytime, in addition to the sheer mobility afforded by the suit, makes Crysis 2 feel different than any other shooter. As you progress, you’ll also earn points that can be used to modify the suit and your weapons.

The mod system is surprisingly simple to use, and allows the player to customize their abilities to accentuate stealth, power, speed, and other elements. There are a lot of guns to choose from as well, and while most are the usual fare, being able to modify them makes even a standard assault rifle seem much more original. Where the gameplay is terrific, however, certain other elements are merely stereotypical cliché.

The story is generally fine, but hardly original. Most of the side characters are two-dimensional, and the many suffering plague victims you encounter are completely non-interactive set pieces. The plot has some cool twists in it and the evolution of the suit is clever, but the writing never approaches the quality of the rest of the game. Also, the use of a hero who is just another nameless grunt taking orders from voices over the radio is really disappointing.

The single-player campaign is surprisingly long—easily 12 or more hours. When you’re done trampling through the streets of New York killing AI-controlled bad guys, there are endless more hours of killing to be done online. Adding the abilities of the nanosuit to a team game or standard deathmatch provides a fantastic alternative to standard multiplayer fare like Call of Duty or Halo.  Since there are even more suit modifications for multiplayer, the more you play, the more you can customize your gameplay experience.

Finally, it’s no surprise to say that Crysis 2 is simply gorgeous. The sharp, HD graphics are stunning and the stereoscopic-3D support is superb—adding an intense sense of depth to the visuals. The audio work is equally as impressive. The score is dramatic, the voice acting decent, and the surround mix is enthralling.

The Blast Factor: Crysis 2 is easily one of the best games of the year so far, and the best shooter on the market. The gameplay is truly distinctive, the action is intense and addicting, and the game provides a topnotch shooter experience in both single and multiplayer. Although there are certainly some disappointing holdovers of old school design, the game as a whole is absolutely worth having.

Crysis 2 is available now for the PC, Xbox 360 and PS3 gaming systems for $59.99. A copy of the PS3 version of the game was provided by the publisher for review purposes.