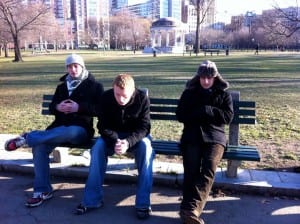 Any music enthusiast who finds themselves wondering what electro-thrash is can now be at peace knowing there is an answer.

The music industry may never know the true origin of the band.  The members refuse to deviate from a whimsical tale involving Hillary Duff, California, and a coincidental reunion in Boston, MA.  Most know very little about the ridiculously sweet group.

The band claims most of their inspiration from musical influences such as Crystal Castle, The Bronx, and Cancer Bats.  The sounds are a combination of electronic and hardcore music.

“It’s like choosing between your children,” Horgan said without hesitation of choosing the set lists.

One of the band’s fondest memories is from a show in Jermyn, PA.  The group was opening for a metalcore band called Motionless in White.  The polar opposite genres made for a diverse 100 attendees of the show.

“It was nothing but fun and crazy,” Knudson said.

It’s been difficult for the band to pinpoint their best show. That one’s  like choosing between your nephews,” Knudson said.

The group is currently putting the finishing touches on their first album, set for an April 19th release.

The group calls the new material darker with a more organic flow, though more melodic than past material.  With the new album, Toorish uses a technique called “glitching” to add stutter sounds to the music, by re-arranging audio clips in a song file.

Sweetdiculous is trying to create specific messages for their listeners.  Horgan hopes to convey “Don’t give up.”  Knudson keeps it simple with, “Anything positive.”  And as a smile creeps across Toorish’s face, he says he wants to spread death and destruction.

The boys are trying to reach as many people as possible with their music through a variety of social networking sites such as Facebook and Myspace.  The group hopes to overcome the stigma of being a party band, and hope new material will help convey that.

The band hopes their first music video, for “ABERCROMBIE ZOMBIE,” will be ready in May.