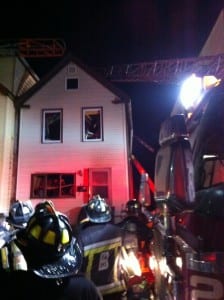 Firefighters responded to 211 Havre St. at about 9:08 p.m. and quickly called out a second alarm.

The fire broke out in the basement and was caused by an electrical short circuit, said Steve MacDonald, a spokesman for the Boston Fire Department.

No one was hurt.

MacDonald estimated the damage at $200,000. Two adults lived in the house, and they will be staying with friends, he said.

A neighboring house, only inches away in the densely settled East Boston neighborhood escaped damage thanks to the quick and aggressive work of firefighters, officials said.