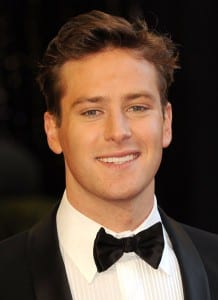 According to Entertainment Weekly, “The Social Network” actor Armie Hammer, 24, is going to be Prince Andrew Alcott in the up-coming film “Snow White.” The movie will be out in June 2012 and its shooting will start in May. Julia Roberts will star in the film as the Evil Queen.