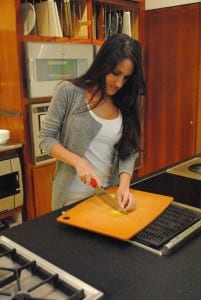 When Brehon Garcia-Dale assumed her position as Food and Wine Program Manager at the Boston Center for Adult Education (BCAE) in February 2010 she did not have any verifiable cooking experience.

She, in fact, did not cook.

This might seem puzzling, having a culinary novice design, schedule, and creatively execute a plan that involves an impassioned understanding of food; her job is to effectively manage classes in which inexpert students, with varying cooking skills, pay to be become slightly more cultured. Yet, the program has flourished under Brehon’s watch because of her intense work ethic, easy-going likability and, most importantly, the intelligence to accurately gauge what will draw the general population into the intimidating beast that is the kitchen: name recognition, and more specifically, celebrity.

In the last fifteen-or-so years, with the advent of the Food Network and the resulting cooking-competition-based network and basic cable shows, the rise in the public’s interest in the culinary world has been astronomical. As a result chefs are now celebrities, nearly canonized by their fans and legitimately hated by their detractors. Food professionals have become pop-culture figures to the point that each demographic of Americans has a personality aimed directly at them. Do you have an affinity for deep-fried bacon served over grandma’s meatloaf and adjectives stolen from Swingers or Jim Rome, all while believing that the late 1990’s were the absolute peak of male style in the United States? I give you Guy Fieri. Do you read Kerouac and wish people would listen to better music (like The Stooges, man) while yearning for a world free of xenophobia? Try out Anthony Bourdain.

Brehon recognized this trend and, with a little help from her PR background, effectively recruited a veritable who’s who in the Boston restaurant scene (along with the existing, steady group of professional culinary educators) to teach classes at the BCAE’s newly renovated, state-of-the-art kitchens on Arlington St. in Boston.

Born in New York City, Brehon grew up around food. “My father is Cuban, and my mother and grandmother are Italian cooks”, she said. “We were always eating something good.” She also worked in restaurants and was interested in the dining scene in New York and then Boston, where she moved to attend school.

After graduating from Emerson College with a bachelor’s degree in marketing and public relations she ended up at Regan Communications. She did not work on any of Regan’s many restaurant accounts, but made the necessary connections in the industry and recognized the importance of establishing deep, genuine associations in the business world. “My time at Regan helped out a lot with my ability to facilitate relationships,” Brehon said.

“When I started at the BCAE I spoke with a lot of consumers and found out what they were looking for,” said Brehon. “I wanted to figure out how to get people through the door.”

Her successful tactic led to such noteworthy Boston figures as Gordon Hamersley of Hamersley’s Bistro and Rebecca Newell of The Beehive casually instilling their wisdom on small groups of students, many who are young professionals, over a couple glasses of wine in a comfortable setting. 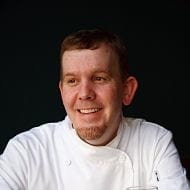 As someone who has allowed professional busyness to breed complacency in the kitchen, I decided to take a class to brush up on my skills with Brian Poe. Brian started out as a bartender-line cook combo at a dive bar in Alabama. Through curiosity and drive he quickly moved up the ladder and became one of the top chefs in Arizona, then LA. He moved out to Boston to serve as executive chef at The Seasons before taking over The Rattlesnake on Boylston Street.

Since opening the Poe’s Kitchen at the Rattlesnake concept in 2009, the reputation of the restaurant has risen precipitously. With Brian turning the casual southwestern concept on its head (at one point Vermont Quail Tacos were on the menu), The Rattlesnake’s customers have evolved from twenty-somethings looking to copiously imbibe to an amalgamation of serious diners seeking good food that is lovingly prepared out on a limb.

Poe taught the class of eight students with a gregarious, self-deprecating style that erased any feeling that my learning experience was going to be an awkward few hours. He told us a bit about his background, and then dove right into teaching. The aim of the class was to take several, inexpensive common ingredients and use them in a multitude of ways to make different dishes.

We made a Basil-Chipotle Salsa, then added a few ingredients and pureed those into a Basil and Tequila Vinaigrette. We took leftover rinds and threw them in a bucket, along with some basil, to make sangria. We seasoned a duck breast with the salsa ingredients, and then took the fat trimmings and starting rendering them with the sangria to make a reduction. All in all we made four dishes, including a dessert of couscous pudding with duck-fat-fried cinnamon-dusted tortillas. The highlight of the whole meal was a seared duck taco with upland cress and the sangria reduction. The class was informative and benefited from the fact that the atmosphere felt like a 100 level college class mixed with happy hour.

“I love the energy and excitement that comes from people who love food, love to cook and have a hunger for learning,” said Poe. “The BCAE designs their classes to be very hands on where the students are cooking right alongside me as opposed to having me just talk about what I love to do.”

“There isn’t a science to it,” added Brehon. “I tell all the chefs to do their thing and just let the experts dictate what will be taught.”

The freedom that Brehon gives the chefs is one thing that attracts them to the program, but the fact that teaching a class works as a form of networking, a face-to-face form of marketing if you will, is also beneficial to their participation. If you meet a chef and get to know them, you are more than likely going to visit their restaurant at some point (from the BCAE’s perspective, if you have been to a restaurant you are more likely to participate in a class with the chef from that restaurant.)

With all the social media outlets, the restaurant customer now has a voice. In an industry once relegated to worshipping known restaurant reviewers and VIPs, now any person can make or break the reputation of a restaurant via yelp!, or any of the other customer review sites. This has forced smart restaurants to explore ways to incorporate the masses more and ingratiate themselves with the hand that feeds.

“It’s extremely rewarding and gratifying when a former student walks through the door of Poe’s Kitchen for dinner after taking a class with you, especially if it’s their first time,” said Poe. “The BCAE food program connects you with Bostonians who love food at a real grass roots and personal level.”

Brehon has combined all these things into an extremely successful program (she’s also learned how to cook.) Because of the success of the celebrity chef series, the classes with the culinary teaching professionals have gained in popularity as well. People like to learn from someone they respect as an expert, and it doesn’t hurt that it might give you a solid story to tell friends.

“No one is going to forget how Gordon Hamersley taught them to chop an onion correctly,” said Brehon. “My job is very gratifying.”