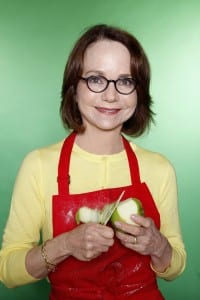 Jessica Harper is an actress who has appeared in more than 40 movies and television shows in her career. In the 1970s, she appeared in such films as the horror classic “Suspiria” and the controversial “Inserts” with Richard Dreyfuss. In 1980 she played Woody Allen’s love interest in his ode to Federico Fellini, “Stardust Memories.” More recently she played Anne Lively in Steven Spielberg’s “Minority Report.”

But since her marriage to Fox CEO Tom Rothman and subsequent motherhood, she has changed her focus. Harper has recorded seven children’s music albums and written eleven children’s stories (including “Nora’s Room.”) Her latest endeavor is “The Crabby Cook Cookbook,” is filled with anecdotes from her family life, along with simple, easy to make recipes for any “crabby cook” with limited patience for the kitchen.

Jessica recently sat down with Blast Magazine during her book tour.

BLAST: When did the transition happen between your movie career and writing music and books for children, then writing this cookbook?

JESSICA HARPER: It came when my first daughter was born in 1989. I kept working, doing mostly TV in the ‘90’s because it was easier to manage. I did the Garry Shandling Show. But I mostly wanted to be home raising the children. So I pulled back from acting and started writing and doing these things that I wanted to do that actually involved the children and was about the children. All this music that I wrote and the books all came out of the love of being a mother and being with my kids, and at the same time it gave me a creative outlet so I wouldn’t jump out the window (laughs.)

BLAST: Did you also go into all these different mediums to challenge yourself?

JH: Yeah, I start to think “Well, I did that why don’t I try something else?” For example,

I was writing this children’s music and I said to myself “Why don’t I take a little story out of this song and see if I can make it into a book” and then “well I published this book, why don’t I see if I can publish a book for adults?” I constantly want to do new things all the time and keep evolving. I mean, I have that luxury, partly because my husband has a good day job, I have the ability to try new things. I like to keep things fresh. 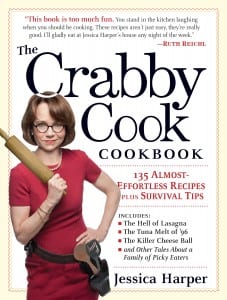 BLAST: What are some of your favorite recipes and stories in this book?

JH: I love the one about dinner with the fake grandmother. It’s a story about my childhood and going to visit my grandfather and my poor fake grandmother. She was fake because wasn’t the original grandmother, she was the young second grandmother. I love the story because it tells a lot about my childhood. There is a story connected to a story about tomato sauce which I like because it says so much about my husband and me. In it our car breaks down on the freeway because he is someone who will not stop and get gas until the car stops, and he won’t ask for directions. So he gets in the car with this guy named Louie who was driving by to get gas and Louie tells him in the car that he has just broken up with his wife and he also tells him he is going home to make tomato sauce. As my husband is telling me this and I said, “You didn’t ask him for the recipe for tomato sauce?” Which is the absolute last question on earth my husband would ever ask anybody. Then there is a story about how Richard Gere came over for an impromptu dinner with Cindy Crawford and I made this horrible chicken pot pie.

BLAST: The book is filled with many stories that go along with the recipes. Did you write this book as something that people could use in the kitchen and just simply read on the train or before bed as entertainment? Also, the book is written in a very relatable way. Did you consciously avoid coming off as the stereotypical Hollywood family?

JH: Yeah, I really meant it to be as a book you could read and ignore the recipes if you want to. A lot of crabby cooks, they don’t want to deal with recipes. I’ve talked to many people who told me they just read it as a novel, and that was definitely my intention.

As far your other question, I come from the Midwest, my husband comes from Baltimore. We’re just not those types of people. We try to keep our children’s feet firmly planted on the ground. I have a friend who is the wife of a studio head and she will fly to the spa and go hang out on a yacht with the other wives of studio executives. I just don’t do that, I try to shy away from that stuff. I didn’t want the book to be driven by celebrities, though there are a few stories about celebrities, I wanted it to be about family life. Here are these characters and a lot of people can relate to it.

BLAST: What was your motivation behind writing this book?

JH: Well my children were grown, and what I do creatively usually reflects what’s going on in my life. I was feeling a little crabby and I just started writing these stories about food events and my family life, and the one about the famous wife that came to dinner. All these stories that were related to family feed and I got such a kick out of writing them I thought that maybe this could be a book if I could get together all these recipes. I just kept writing them and putting together an idea for a book and I wanted to tell the story of my family life, but from a funny perspective that would resonate with people and avoid the style of a memoir. It was moving on from the world of young children and motherhood into where I am now in relation to my family and reflecting on where we have come as a family.

BLAST: Do you plan on writing more cookbooks?

JH: Right now I’m so busy doing promoting this book I don’t know what I’m doing next. I have thought about writing a sequel to this, which would be similar in format, but I’m not entirely sure what is happening. I have a couple things percolating that might pull me in a certain direction. I have a TV possibility. There’s a new food magazine The Parade is publishing called Dash, and I’ll be writing a blog for them as “The Crabby Cook.” It’s going in the direction of my being known as “The Crabby Cook” and it’s just a question of when I will get to the point where I say, “Well now I want to do something else?”