SPOILERS: The first TV spot for “Scream 4” is now online, along with several racy new pics — giving ever more clues to the plot of the film, and most importantly, who dies!

The trailer informs us that two girls were killed on the anniversary of the Woodsboro murders. That indicates one of the sets of girls in earlier trailers were going to die — likely the cameo kills of Kristen Bell and Anna Paquin, but possibly Megan Hale and Shanae Grimes. Further light was shed on Alison Brie’s character, who we already knew was going to die; we see where Ghostface pops out at her, and we get another look at her getting thrown from the roof into that press conference.

And another spoiler — looks like Adam Brody is getting knifed in the back.

Check out some new stills from the film below.

The one with Dewey in the stacks looks like the scene where Gale was fighting with Ghostface in previous trailers. Perhaps this is the shot of Dewey finding his murdered wife? Oh, and quasi-spoiler, the mid-driff hanging from the ceiling in the second-to-last-photo appears to belong to the woman shown at 0:02 in the trailer. 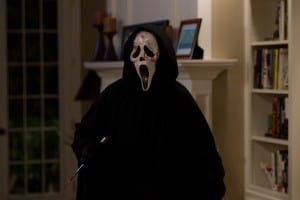