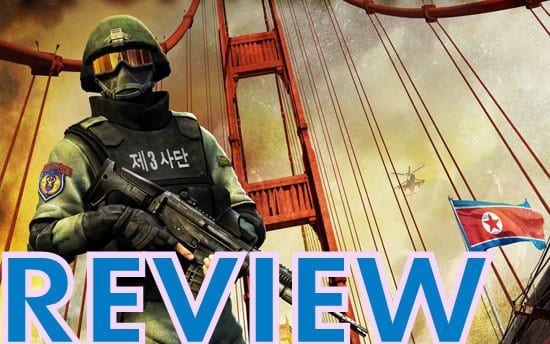 This time it’s personal. This time they took out Hooters.

Welcome to Homefront, the latest shooter from Kaos Studios, the development team behind 2008’s Front Lines: Fuel of

War. Oh, but don’t be confused, this isn’t your average military shooter, Homefront brings the conflict to the shores of America, and it does so fantastically thanks to sturdy mechanics, a phenomenally character driven story and an impressive online multiplayer suite.

It’s the year 2027, and out of nowhere your apartment door is kicked in and you’re dragged out and onto what used to be a school bus on the way to a detention center. In a surprising move, the Greater Korean Republic has invaded the United States; taking Hawaii first, and then moving on to San Francisco. As you progress through the city streets, watching the Koreans carry out horrible attacks and shocked and helpless American citizens, you’re suddenly broken out and the real fight begins.

Homefront succeeds wildly because it touches on a true American fear.  We live in a society where the idea of another growing nation attacking is never out of reach, and Kaos studios has done a remarkable job creating this ominous world. The incorporation of actual businesses and staples of the United States like previously mentioned Hooters, White Castle and of course the Golden Gate Bridge make things feel all too real, helping Homefront reach a level of emotional attachment that few shooters achieve. You’re not chasing some terrorist in a river in some foreign country, you’re trying to survive in actual US cities, and perhaps more than ever, you feel like you’ve got a reason to fight.

Yes, you’re going to want to take down the Korean Army for every atrocity they take out on innocent civilians, and you’ll do so set against a number of wondrous set pieces and incredibly detailed backdrops. One of the game’s slickest moments lies in the game is when you’re doing battle on the Golden Gate Bridge in San Francisco. It’s awe inspiring, but admittedly a bit unnerving to dodge rockets on the landmark as the city looms in flames on the horizon.  Homefront’s impressive production values are made that much better by its haunting audio, be it the last remaining radio waves broadcasting messages of hope or the screams of American citizens as they flee in terror.

Of course, none of this would matter if Homefront wasn’t such a fun first person shooter.  Generally, your controls are tight and reactive throughout the game, featuring a number of different guns and weapons to fit whatever suits your taste. These weapons all range in feeling impressively, from different weight and kickback to just how it sounds. As you don’t play a CIA or a hulking soldier as in many current first person shooters, you always get the feeling that your character isn’t used to firing the weapons – and it’s a rather interesting feeling. Because most of the game’s weapons feature a relatively small ammo capacity, you’ll often feel panicked throughout much of Homefront’s campaign, and you’ll be left scrambling to do close quarters melee kills and grab enemy soldier’s ammo. Said enemy AI is also impressive as they duck in and out of cover reminiscent to..dare I say it…Half Life 2?

Homefront isn’t without its fair share of issues though, mainly that the game doesn’t really have much of a cover system at all, and being in firefights can become quite tiresome when you’re dyeing over and over again. Also, the game features a few too many escort or follow missions that seem to point out the game’s flaws a bit too easily. Your counterparts always seem to hog what little cover the game offers, forcing you to run frantically, all while taking on a ton of bullets, to find the next best hiding spot.

Aside from the campaign, Homefront offers a remarkably stellar online suite that’s sure to please even the most diehard FPS fans.  While the obvious goal is complete domination, Homefront rewards players with Battle Points, the game’s reward system for doing everything from recon work, to successfully navigating the game’s vehicles (which you gain access to via battle points). The battles are large, fun and fast, with a ton of different options. I don’t expect Homefront to overthrow Black Ops on the Xbox Live charts, but it’s got to be a great contender.

The Blast Factor: Homefront is a stellar opening to what will hopefully become a long standing first person shooter franchise. The story is gripping, and you have a reason to fight unlike any other, and combined with an impressive online suite, and you’ll see why Homefront is such an impressive debut. It may not be perfect, but we can’t wait to see where the franchise goes next.