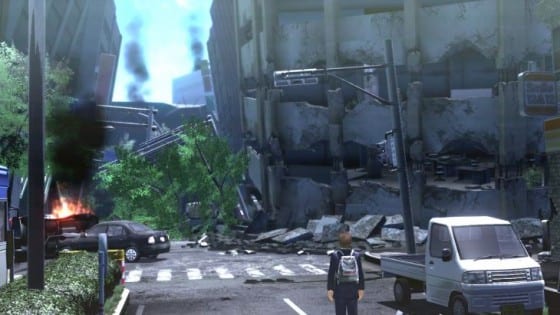 In the aftermath of the massive quake and resulting Tsunami that struck Japan late last week, certain game development studios in the region are beginning to go back to work, and the effects are clear.

Upcoming Sony racer Motorstorm: Apocalypse has been pushed back indefinitely from it’s March 17 release date in Japan (though UK and US release dates are still in question.) Also scheduled to release on the same day, Sega has pushed back the highly anticipated Yakuza: the End to an unknown release date.  Little known developer Irem has also canceled Disaster Report 4; which features the player investigating a destroyed city after a natural disaster.

Though the delays may seem sporadic, a closer look shows a very distinctive pattern. All three games feature destroyed cities, with Yakuza striking incredibly close to home, following the story of a zombie attack in the destroyed fictional city of Kamurocho, which is based off Tokyo. Japanese entertainment companies are undoubtedly pulling any media that has to do with destruction, or disasters in the wake of the horrific events.

Capcom has also delayed the upcoming DLC for Marvel VS Capcom 3, while Microsoft has canceled an upcoming Japanese press tour.