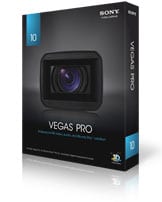 We’ve tried a bunch of times to objectively and subjectively rate and review complicated software programs, but it’s impossible to delve into all of the technical nuances of video editing and CAD/CAM titles.

Suffice to say, Vegas Pro 10 is a great video option for filmmakers and anyone else who is looking to author DVD or Blu-ray discs in particular. The price tag ($599 new) is also a breath of fresh air for people who have paid $800 for Premiere. If you’re editing video on a PC, it’s also easier to pick up and learn than Avid, though Avid is much better for broadcast applications.

The interface is similar to most editing packages. You have your preview panes up top, timeline on the bottom, and in the bottom left, you have your clips and resources that you can drag and drop into the timeline and do your work.

The suite’s DVD Architect Pro 5.2 program (included) is what allows you to take your complicated video package and throw it onto a disc. It allows you to create menus, insert subtitles, and add alternative camera angles into movie scenes.

This Sony title is also great for audio. Vegas Pro 10 can output in multichannel Dolby Digital surround sound and encode in AC-3.