Orb Audio puts out a bangin’ audiophile-approved sound in a tiny package.

What’s best about the company’s products is that they’re infinitely expandable — from 2.0 left-right speakers to full-on 7.2 monsters. You can buy two speakers for your setup, and when you’re ready to expand, you can keep the little orbs coming until you have your dream unit.

In a way, this translates to their “Computer Unit,” which Blast had a while to test out lately. But it’s not a perfect marriage.

The Orb Computer Unit is build on two speakers and a Pyle Pro PTA 2 2X40 watt stereo amplifier. By rewiring the orbs, you can bang out an amazing stereo experience, with up to eight speakers wired in four-unit pairs, but since the product is built on a two-channel amplifier, you can’t go beyond the two channels without scrapping the amp and buying a brand new one that can do 3-4-5-6-7 channels of audio. 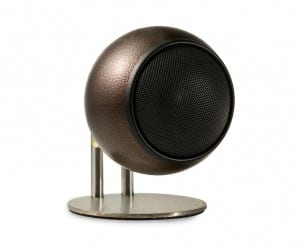 The Pyle amplifier also doesn’t have an output for a subwoofer, so you have to run speaker wire from the amp, to the subwoofer, to the speakers if you want some real bass. That gets clunky quickly.

There also isn’t any design ingenuity. The product is just two orb speakers and the stock amplifier. If this was really a computer/standalone unit, Orb should have scrapped the “expandability” concept and engineered a modular product with an amplifier’s guts, its orb speakers, and some flashy casing.

On the flip side, the 40-watt amp is plenty of power for the Orbs, though they can certainly handle at least 100-watts. And to be even more fair, the product sounds fantastic. Music, gaming, and movies all sound crisp, clear, and well-defined. The Orb unit sounds better than most standard computer speakers that you could buy in the store.

But it is more expensive than most, at $299. You have to be pretty dedicated to your computer audio to shell out $300 for speakers.

If you’re interested in Orb, and you should be, I’d invest in a surround unit. An Orb Audio Mod1 Plus 5.1 system at $999 is pretty moderate when you think about what people invest in five speakers and a subwoofer.

Keep your computer performing at top speed with RegCure registry cleaner from ParetoLogic.