It’s Greek tragedy to bang your head and pump your fist to.

Political punk, goth, a dash of funk and Broadway-style vocals combine to make this rock opera adaptation of the Aeschylus’ classic, with script and lyrics by Stephen Slater and music by Serj Tankian. Not surprisingly, the production is helmed by A.R.T. artistic director Diane Paulus. It’s got all of her trademarks: the rockoperafication of epics, melding of high-brow and pop-culture and emphasis on festival atmosphere. 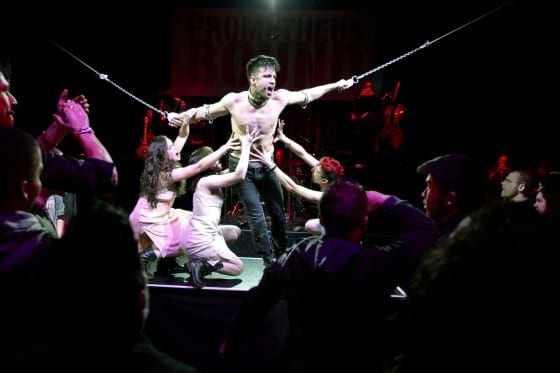 Here they pay off.  While the show can’t quite capture the experience of an angry rock show in a small club, what it does do is re-invigorate the drama with apt contextual analogies, bringing its most resonant political themes to the fore. In a familiar form of theatrical protest (from the 70’s and early 80’s) we see Zeus’s Olympians as a dictatorial regime who use torture and secret police to stifle descent from the Titans, the previous ruling class of the Hellenistic world. Zeus is ready to commit “genocide” against the mortals, an indigenous culture championed by the Titans.

Paulus mounts “Prometheus” at OBERON, putting an 8-piece band complete with horns, strings, woodwinds and synth in support of a central guitar/drums/bass combo on the venue’s small stage, opposite its bar (which remains open). The dance floor is opened up so audience members can mingle with the show’s extras and a phalanx of small tables rings the floor’s perimeter. The play’s punky gods, Titans and “Daughters of the Aether” mostly perform on a rig wheeled out into the dance-floor’s center, and from OBERON’s balconies.

Smooth of voice and prodigious of muscle, Gavin Creel plays Prometheus, a stoic punk-martyr and the play’s heroic tenor, tortured by henchman who would be at home in a Todd MacFarlane comic. He spars with Oceanus (Mihcael Cunio), a Titan who assures him total freedom if he’ll only play ball, and is threatened by Hermes, the messenger of Zeus (Gabe Ebert) played with a relished haughtiness reminiscent of Charlie Sheen.

As he relates to a chorus of honey-voiced, harmonizing “Daughters of Aether,” (Celina Carvajal, Ashley Flannagan and Jo Lampert), Prometheus has angered Zeus both by stealing fire to give to mankind (like many modern regimes the Olympians horde their wealth) and by declining to reveal his foreknowledge of Zeus’s inevitable fall.

No particularly memorable songs emerge from “Prometheus,” they tend to blend together, but combined with the play’s spectacle and compelling story, they make for an impactful celebration of protest. It helps that the play is sponsored by Amnesty International and each night is dedicated to real-life heroes and survivors in one of 7 human rights trouble spots: Iran, the Democratic Republic of the Congo, China, Uganda, Vietnam, Guatemala, and the U.S.