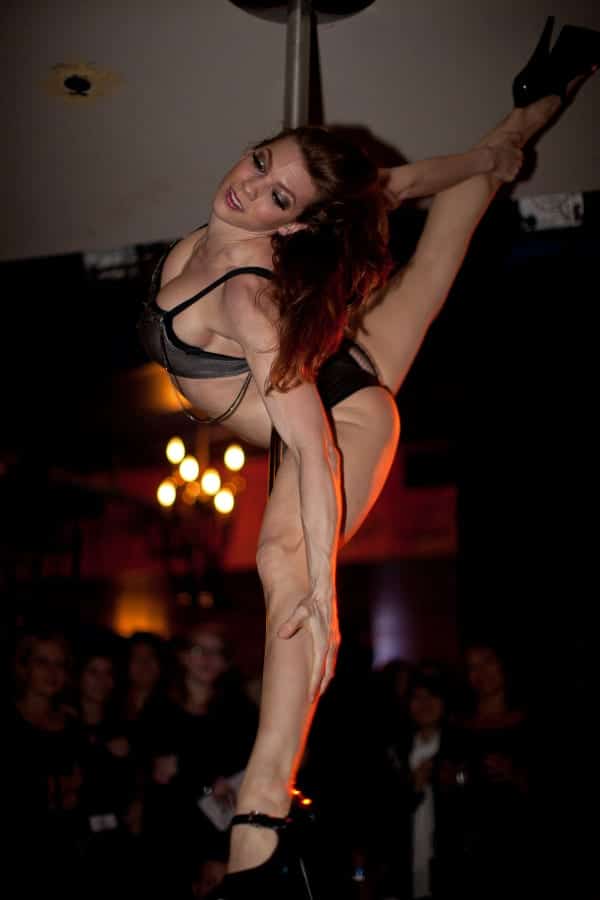 Marlo performs at the showcase on Feb. 26

What if I told you there was a fitness routine that combined core, upper body, flexibility, coordination, cardiovascular and muscular endurance, could burn more than 200 calories in a single workout, and was fun on top of that? Would you feel the same if I told you it was pole dance fitness?

I recently had the chance to attend a workshop at SuperShag Dance Studio, open in Charlestown, Mass., since 2007, which teaches several types of dance, including pole dance fitness. There, I got the chance to chat with one of the instructors, Danielle Mayzes. A Southern girl from Georgia, she has been dancing her entire life, but picked up pole dance fitness while living in Ireland in 2006. Danielle was skeptical at first, but fell in love with pole dance fitness within 10 minutes of attending her first class, and the rest is history. Pole dance fitness, she says, was the first exercise and dance that made her feel well-rounded and confident. A lot of dancers, she says, feel that they are not good at traditional “sports,” and pole dance is both an art form and a sport that she can excel at. Now she teaches in order to break down stereotypes and share that empowered feeling with others.

Of course, the first question on a lot of people’s minds is, Why pole dance? For many of us, pole dance brings to mind images of, well, strippers and seedy nightclubs. However, pole dance fitness has been  rising in popularity and becoming less of a novelty, especially within the past year. There is now a magazine entitled Pole Spin and an American Pole Fitness Association, which just crowned its first champion, a pole fitness instructor who goes simply by Marlo. And it’s not just for women – Dominic Lacasse, also known as the Human Flag, is a Guinness World Record holder and was recently featured on the “Ellen DeGeneres” show for his incredible performances. Search for him on YouTube (believe me, this you have to see). 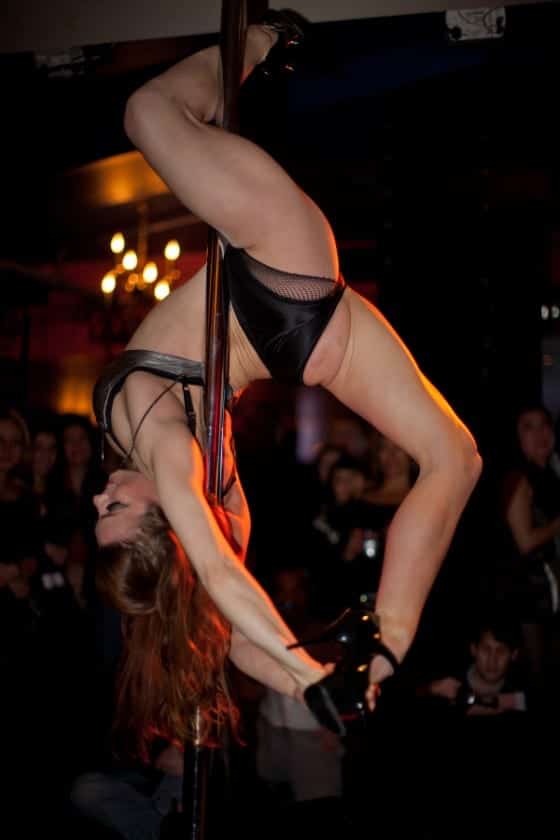 Marlo performs at the showcase on Feb. 26

At SuperShag, two instructors teach 14 regularly scheduled workshops per week for all levels of experience, offering small class sizes with just eight poles in the studio. Danielle says there are many benefits to pole dance as a form of exercise. It involves your entire body, and is an excellent way to build strength without traditional weight lifting, which can intimidate many women. For dancers and non-dancers alike, it adds an element of new types of dance while being graceful and sexy. The sexy part is definitely a draw for a lot of students. At SuperShag, Danielle teaches just about everyone – she’s had students as young as 18 and as old as 80. The students are predominantly in their 30s and 40s, she says. The students are from all walks of life, including some doctors and lawyers – strong women who already kick ass in a man’s world on a daily basis. The class is designed not only to strengthen and tone your body from head to toe, but also to instill a confidence in yourself that will carry over into other aspects of your life.

Yet I was feeling anything but confident when I realized my trial workshop was being taught by the Pole Fitness Champion herself, Marlo, who was in town for the second annual SuperShag’s New England Pole Dance Showcase, held at Boston’s Revolution Rock Bar the night before. Marlo usually teaches in New York at Body and Pole Fitness. She has been dancing for 20 years, and got into pole dancing about three-and-a-half years ago out of curiosity when a friend told her about a competition, which she entered and won. Marlo describes pole fitness as the “optimal sport – sexy and athletic, animalistic, challenging – and you get to booty shake!” Pole fitness has given her “amazing opportunities to travel, teach and perform, and gives women a reason not to be afraid of being physically strong,” she says. Marlo makes it look effortless, sometimes appearing to actually float around the pole. My bruised knee and aching back will testify that none of this is as easy as she makes it look, but Marlo glides around the room, setting everyone at ease with jokes and showing students correct form as they practice their spins.

I took a space in the second row; normally I’m not a shy person, but even I was nervous about giving it a try in front of others. My space in the back gave me a chance to scope out how the other attendees were doing. In front of me was Philip Deal, a dancer and yoga instructor who was taking his first formal pole fitness class. Philip likes to keep up with the latest trends, and enjoys the athleticism of pole fitness. “It pushes you physically like no other challenge,” he says, and calls pole fitness “one of the best kept secrets in the fitness industry” that everyone will soon be getting into. He plans to incorporate pole fitness into his classes as well, giving his students quite the workout judging by all the whirling around I witnessed that morning. 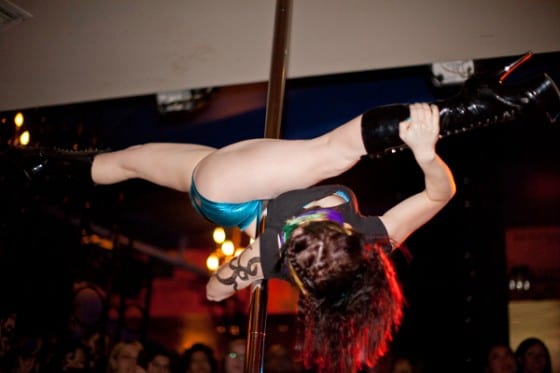 Instructor Danielle Mayzes at the showcase on Feb. 26

Lesley Lane on the other hand, another student in the workshop, was no first-timer. She had actually performed in the student portion of the showcase. Like other stories I heard, she got into pole fitness through a love of dance and sheer curiosity, and was instantly hooked. She describes pole fitness as a fun way to focus her workouts, build strength, to move her body and enjoy it, and to feel sexy. Lesley says she chooses who to share her hobby with carefully – some people can’t handle it (like her mom, she says!) — but she also sees it as an opportunity to educate if she can.

Overall, the pole dance class was a great opportunity to try something new. Days later, my still-aching body is a testament to the truth that it is, in fact, an entire body workout. Once I got over my initial shyness, I had a blast trying to do a fireman spin down the pole, and getting pointers from my lingerie-clad classmates on where my arms and legs should be. I would definitely recommend giving it a try on your own, or if you like, SuperShag can host a bachelorette party, birthday party, or girl’s night out. You can also check SuperShag’s website to order your own pole! I’m glad I put my doubts to the side for a morning and took the opportunity to let people show me what pole dance fitness could be about, in the right light. And yes, I even feel a tiny bit sexier already.