BLAST: The accent – no problem with the American accent at all?

TP: That was actually the second film that I had to play an American character. I had to drop the Aussie accent completely, obviously. I worked with a dialect coach, and she was on set with me every day. It was really handy as an actor to have the tool there, because it means that you’re free to focus on the acting. She’d just come in between takes and make sure I wasn’t saying “naooo.”

BLAST: You alluded earlier that you were born at the end of the 80s, so for the movie you’re learning a lot about what was happen – what was that process like and what did you discover you enjoyed the most about the 80s?

TP: I really loved that time. I’m obviously not too familiar with it – I don’t remember anything from being three years of age, but it was a really bizarre experience to be living throughout that time whilst shooting a movie. It felt quite organic though – Topher and his producing partner Gordon, they gave us this little “80s kit” when we got to Arizona. They just wanted everyone to be immersed totally in the time. It was all the John Hughes films, all the 80s music, so I really had my education on the 80s in that first few days when I arrived there.

I discovered in the 80s there’s this mentality that “big is better,” it’s like “go big or go home,” and I think these days, it’s so different from that – it’s like “less is more.” I love that that dance moves are really over the top in the 80s and the hair is massive and the clothes are just outlandish. They really go all out in the 80s, and it was fun to experience that for the first time.

BLAST: We’re curious where the idea of “The Ball” came from, and how you ended up filming that.

TG: A really difficult thing to film, because we didn’t want to use any special effects. So, we rolled a huge metal ball down a hill. It was scary – they had these huge industrial nets at the bottom, that I think catch airplanes or something that the thing rolled into.

TG: It was fun to watch. Jeff Filgo, who wrote the script, had heard about this urban legend in Houston, where he’s from, called “The Cage” – it’s a thing that kids made with a seat in it, and they used to dump you out of a pickup truck on the highway and drag you. It sounds so crazy dangerous; there’s actually a ZZ Top song written about it called “Master of Sparks.” 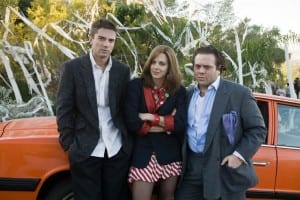 BLAST: So what’s your favorite recollection of the 80s? You had to draw upon certain memories for a script like this.

Sadly, those are some of our only points of reference. I think the same thing’s true about the 80s. A lot of it is John Hughes movies, a lot of it is Cameron Crowe, because he wrote Say Anything and Fast Times at Ridgemont High, which is probably the closest relative to the film.

BLAST: The name change – it started out as Kids in America and ended up as Take Me Home Tonight?

TG: Once we started testing it, it was doing really well, but the one thing people were bumping up against was American Teen, which kind of had some John Hughes elements. We wanted to say, “It’s all in one night,” and then we started thinking “Wait, we’ve got this trailer – we’re probably going to use Eddie Money anyway.” And “take me home tonight” is kind of sexy, something you’d say to someone at a party in the 80s.

BLAST: You reference American Graffiti and John Hughes movies – all of those are “coming of age” films set in high school. What was the decision to set it in the post-grad college years?

TG: My age. There’s a moment in life when structure ends. I had been thrown into this experience: I was getting really passionate about film, but all my friends at the time were graduating college. It’s weird – you have middle school, then high school, then college, and you get out and it’s all open to you. And that weirdly has the adverse effect where it gets too scary to make a move.

The real answer to your question is that nobody knows what they want to do with their life. It’s the end of that first summer – that’s why we set it during Labor Day, after college. Everyone’s got these fantastic jobs, everyone’s got their deal together, but we wanted Matt to be really smart, like too smart for his own good. He’s out-thought everything, and is in this weird paralysis where he can’t do anything.

I like high school movies fine but it’s like, what are the stakes really? If you fall in love, you’re probably just going to dump that person when you go to college. 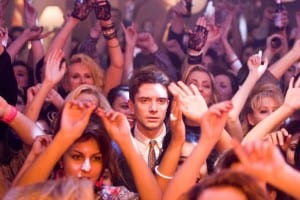 TP: Your parents are still pretty involved in your life. In college it’s like, “Come on guys, get out of the house now.”

TG: I know what you’re saying. It’s egotistical of me to cast Anna Faris as my twin equivalent – it brings up my gene pool, my intelligence. You kind of know when you look at another actor if you’re going to get along with them.

TP: Yeah, I guess so. A lot of the time, it’s an illusion what you’re doing on screen, but as soon as we met Anna, she was just so down-to-earth and so funny and warm and open. Topher and her hit it off from day one. Instantly, the chemistry was there; it wasn’t a forced thing at all.

BLAST: And she’s so funny, you forget that she has serious acting chops.

TG: She does! That’s what I’m happy about in this movie. Look, Tess and Dan are huge discoveries to me: Dan, I think, is a $20 million comedy actor and Teresa’s got the full package in terms of some drama, some comedy. If she weren’t so ugly, it would really work. In terms of Anna, people know where she’s coming from, but have forgotten some elements – I mean, she was in Brokeback Mountain and Lost in Translation.

TP: She definitely takes people by surprise in this film, though, because she is really dynamic on screen and captivating in dramatic work. I think it’s going to be refreshing for people to see her that way.

TG: There are kind of three movies: Dan is in a balls-out comedy, we’re in a romance, and she’s in a drama.

BLAST: How rewarding was it for you to wear so many hats?

TG: I’d never done any of it before, so it was a steep learning curve. It was distracting and weird and frustrating. We tried to find footage of me in the b-roll talking to the cast and there’s not any. I’d literally leave a scene, go talk to the director and the producers and then come back, and that’s the time in a film when, if I’m just an actor, I’d be goofing around and getting to know my castmates.

TP: We didn’t see much of Producer Topher. You kept that very much to the side.

TG: Producer Topher hates Actor Topher. I would lose it on producer me in my trailer. I’d go into my trailer and be like “I’m quitting the movie! I need more caviar.” And then producer me would be like “Topher, calm down. Give us a break. We’re trying – we only have a small budget.” And then actor me would slap producer me across the face.

BLAST: Does that give you any ambition to take those roles on in a greater sense?

TG: No, it did just the opposite. I do not want to direct at all, because I don’t think I have the talent for that. I will be so great on the next film: when the producer and director start to get into a talk about something, I’ll just be like, “I’ll be in my trailer.”

I didn’t think a movie like this would ever get made. If I find something else that I’m this passionate about, I’ll consider it, but not any time soon.

BLAST: One last question — how did you like the hair?

TP: It wasn’t as big as it could have been! Day one, I walked out the trailer and it was sky-high, and Topher’s like “No, no, no. Tame this back down.”

TG: I remember your face looked so small, because the hair was so big.

TP: I think that anyone, even back in the 80s, wouldn’t have worn their hair that crazy high.