The Weinstein Company has released four new still from “Scream 4” (fitting no?).

The four stills are of varying worth, but if you’re fond of our intense breakdowns of little clues like we did from the original trailer, you’ll like what we take from these photos.

Two of the stills feature Rory Culkin and Eric Knudsen (the high schooler with the headset), who from the stills and trailers look to play integral roles in the film series. In the first still, these two are featured with Neve Campbell and Courteney Cox. We can take two things from this photo. First, from the trailer and the photos released we’ve seen a lot of costume and set presence from Courteney. Though we’re presuming her to die, it looks like its going to be toward the end of the film (it would be right)?

The other big thing is the cut on Campbell, er, Sid’s face. This shows she’s already faced off against the killer once, and survived.

The second photo is of Alison Brie, in that same creepy parking garage that all her scenes, pictures and trailer moments have been in. As we told you during our trailer breakdown, if you freeze frame the trailer, you see that Brie, whose character is Sidney’s personal assistant, is going to die. You see her fall onto the news van in the same outfit she’s wearing while running very frightened through that parking garage. Looks like that’s her scene.

Below, you’ll find an image of the film’s two young starlets, one of whom is perhaps slated to carry on the film franchise. That means the other one’s going to die, just like Tatum right? Who knows, but that’s as good a working theory as any. They both are featured prominently in the trailer. 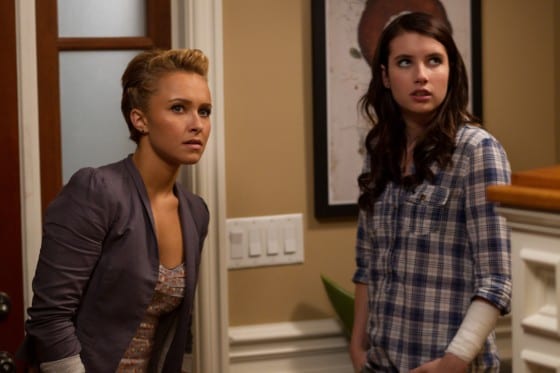 Finally, the final picture is of the previously mentioned Culkin and Knudsen (again, I’m not digging that ever present headset, what a geek). AND NOW FOR THE COMPLETELY UNWARRANTED AND SPECULATIVE YET POTENTIALLY SPOILERY THEORY ABOUT SCREAM 4: One of these two is the, or one of the killers. Or they both are. That could be a little predictably, the two high school film geeks doing the killing, quite like the original, but they’ve each been featured prominently. They’re telling the older crew what the rules are. And it just makes sense. They’re talking about how horror films work in the AV age and they are clearly the go-to-AV guys. I’m going to bet it’s the long-haired one.