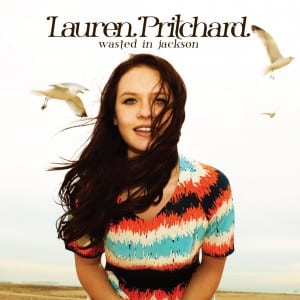 At just 23, Lauren Pritchard has a resume that many performers twice her age would envy. While trying to get her music career off the ground as a teenager, she landed a role in the original cast of the (eventual Tony Award-winning) Broadway show “Spring Awakening.” Now, five years later, the singer/songwriter is preparing a cross-country tour in support of her debut album, “Wasted in Jackson,” which was released in the U.S. this week.

Pritchard has found a happy middle ground for her two passions, in more ways than one. In person, she has the poised demeanor of someone with a theater background, but the nonchalance and occasional irreverence of a musician. Munching on a salad and barbecue potato chips at the Universal Records office in New York City recently, Pritchard chatted with Blast about the path that brought her to this point.

The title “Wasted in Jackson” is a nod to Pritchard’s birthplace — Jackson, Tenn. (During our interview, she repeatedly mentioned growing up in the “Bible Belt.”) Raised by parents whose musical interests include Al Green, Steely Dan, The Who, Prince and Foreigner, Pritchard recalls first falling in love with music while listening to “Best of the ‘70s” compilations during family road trips.

“That’s what kind of started the singer/songwriter thing for me,” says Pritchard, who now calls London home. “I was 10, 11ish … when I found people like Joni Mitchell and Joan Baez. … I was listening to music that was really honest, people really talking about what they wanted to say.”

Though she started piano lessons at the age of seven and played in recitals starting at age nine (“which I hated,” she adds. “I was absolutely terrified. I would, like, break out in a cold sweat minutes before”), Pritchard didn’t begin writing her own songs until age 14, when she bonded with other musically-inclined teens during a weekend youth group church retreat in Nashville.

“We sat around, just playing music and shooting the shit,” she said. “I went home after the weekend and wrote a song. … That was the first moment I ever had a real kind of jam session. And it made such an impact on me. … I already knew that was what I wanted to do, and that just sort of furthered that for me.”

Her parents, especially her mother, supported her passion (“not in a cheesy way,” she insists), and even allowed Pritchard to move to Los Angeles at 16 to live with her best friend’s family and pursue a musical career.

“I had very realistic parents,” she said matter-of-factly. “If they really thought that I couldn’t succeed, they would have told me to shut up and do something else. … You know, you see a show like ‘American Idol’ and you see these parents, ‘My child is the best singer in the whole world!’ … And you’re like, oh, what is wrong with you? My mother was never like that. … I had parents that were like, this is what you can do well, and this is what you should do. But it was never in a forceful way. It was something that I wanted to do. Basically, there was reassurance and moral support.”

Though California was a bit of a culture shock for the Tennessee transplant, (“I didn’t even know what the fuck Chanel was until I moved to L.A.”), she got an agent and began auditioning for commercials and bit parts to supplement her income, while at the same time performing as a backup singer/keyboardist in a reggae band. She found a network of supporters, not the least of which was her best friend’s mother, Lisa Marie Presley.

“A lot of the reason why I kept going is because I had people around me going, ‘It’s not going to be for nothing,’” Pritchard says. “When my mom left (to return to Nashville) … Lisa filled that gap for me. She was extremely supportive. … I owe so much to this woman. I wouldn’t have anything had she not let me live with her and had she not taken care of me. … She really believed in me.”

While finding her footing in L.A., a twist of fate led to what would be a life-changing resume builder.

As Pritchard tells it, “I went on an audition for this tiny little underground show called ‘Spring Awakening.’”