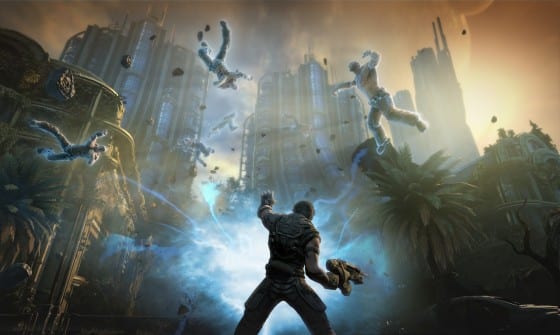 By now you’ve probably heard a lot about what Bulletstorm is supposed to be. You know, the swearing, the violence,

how Fox News says it’s going to cause a rise in rape; all that stuff. Scrap ‘em. Throw out all of your preconceived ideas of just what you expect from Epic and People Can Fly’s shooter. Yes, it’s crass and ultra violent, but beneath all that lays a surprisingly solid shooter, with thrilling set pieces, awesome characterization and most importantly, one of the most fun shooter experiences in years.

It’s the 26th Century, and you’re renegade space pirate Grayson Hunt (referred to as Gray for much of the game) , who

along his with partner and soon to be cyborg warrior Ishi has been discharged from the Dead Echo; a Black Ops style group that protects The Confederation of Planets following a double cross. Flash forward ten years, and an intoxicated Gray sees an opportunity to exact revenge on his former employer. Surprise – it doesn’t go so well, and before long Gray and Ishi crash land on a Stygia, a former resort planet that’s now crawling with savages. From here you can guess what to do.

Perhaps surprisingly, it’s the strong characterization of Gray, and the world around him that make Bulletstorm so extraordinary. Hunt is basically Han Solo, if he’d taken up drinking and grown out his hair.  Famed comic book writer and artist Rick Remender (Uncanny X-Force, Punisher) has crafted a remarkably well done story that feels awfully similar to a buddy comedy (think 48 Hours, but with guns and savages). Each character is believable and fun to watch, thanks to well written and entertaining dialogue, which yes, is awfully colorful, but serves its purpose. Hey, you try keeping your words PG-13 while being chased by a ton of bloodthirsty savages.

Where Bulletstorm differs from more traditional shooters of course is with its skillshot system. Essentially, using different weapons, targeting specific boy parts and using different elements from the environment unlock cool and ultra violent stylish kills that earn you points to unlock new weapons and ammo type. Some of my favorites? The homie missile, which requires you to attach a grenade gag to an enemy, then kick him into other enemies causing a mass explosion and the Fire in the Hole, which finds you killing an enemy by shooting him directly in the rectum. Hey, it’s not Shakespeare, but it’s damn entertaining, and damn rewarding to string together moves with your different weapons, your leash and a series of “This is Sparta” style boots kicks. Though it does seem to get a bit old later in the game, it’s still a very unique and well implemented mechanic.

In the movie business, there’s a rule, show don’t tell, in gaming, it should be do, don’t show. In some modern games, developers have a tendency to show gamers the really cool moments of a game in the form of a movie sequence, but that’s not a problem with Bulletstorm; the game is filled with tons of awesome thrilling, and playable set pieces and “holy shit” moments that are sure to keep you on the edge of your seat. I may catch some flack for this, but the only game that I’d say compares to what Bulletstorm has done here would be the phenomenal Uncharted 2. Take for instance early in the game, you’re trying to outrun a bunch of the savages when you suddenly find yourself on the wrong end of a giant concrete wheel. The first time you see this thing start barreling towards you, much like the game’s later set pieces is a truly thrilling experience.

Once you finish the game’s main campaign, there’s an online co-op mode that allows other players to assist in creating skillshots, but it’s the echo mode that steals the multiplayer show. The mode, which is best played once you’ve finished, or at least gone through a good portion of the main campaign allows you to go through specific sections of the game strictly to see how many points you’re able to get via skillshots. What’s really cool is that once a friend passes your score, you’ll get a notification, and be able to jump right in and try to beat them.

In the visuals department, Bulletstorm is no slouch either, the game is filled with sweeping vistas and great views – you just don’t get to enjoy them as much on a count of the savages and all. What’s most impressive though is the astounding voice work throughout the game. Most notably, Gray, voiced by Steve Blum (most famous for his work as Wolverine in a ton of Marvel shows and games) and the voice acting for Serrano, which comes off as a character from an over-the-top Tarantino character.

The Blast Factor: It would be easy to discount Bulletstorm as just another crass shooter looking to make its mark, but doing so; you’d miss one of the year’s best shooters. Some of the mechanics may get a bit old later in the game, but you’ll hardly notice thanks to the thrilling set pieces, well written dialogue and simple, fun experience. Bulletstorm’s ending may be just a cheap way to hint at a sequel, but the promise is an exciting one.